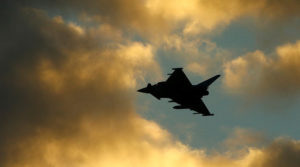 The world is falling over itself to bomb Syria.

The following statement from Reuters summarizes the situation: “Most of the world’s powers are now flying combat missions over Iraq and Syria against Islamic State. But any consensus on how to proceed has been thwarted by opposing policies over the 4-year-old civil war in Syria, which has killed 250,000 people, driven 11 million from their homes, left swathes of territory in the hands of jihadist fighters and defied all diplomatic efforts at a solution.”

While it may seem to the outside observer that this catalogue of mayhem is the result of incompetence, to me – on the contrary – it is evidence of things going to plan.

I have never, thus far, seen a war the ruling elite clearly wanted to happen not happen.

Here, as in all other cases, there has been a bit of hand-wringing, some crying, some protests, some moving speeches. But like the morality plays of medieval times, after enjoying the sermon dressed as entertainment, life has inevitably carried on as normal with the barons raping and pillaging and everyone else having to put up with that reality.

Destruction of Syria is the plan

This time the plan – at least judging from the outcomes – is to destroy Syria.

Syria has been anathema to the self-appointed arbiters of righteousness: the ‘international community’, that coterie of hypocrites which arrogates to itself the monopoly on meting out death to those who won’t get with the program.

This group dislikes Syria which has had an uncompromising stance towards Israel and an independent financial system, and is using the chance to destroy it to flood Europe with refugees, thus further debasing the makeup of its constituent nations, and simultaneously justifying a lockdown in those countries.

Everything was going swimmingly until Putin stepped in.

While many in the West who have grown jaundiced at the obvious usurpation of our governments by outside interests ascribe almost saint-like motivations to Putin, I do not. He is a superb strategist. Exactly what he is strategizing for is not clear yet.

What is clear is that his move into Syria threw a spanner in the works of a status quo the US was quite happy with: growing terrorism and mayhem in Syria and spreading nicely to Europe.

Assad himself said a few days ago to the BBC (courtesy of Czech Television) that ISIS was growing smaller after Russian bombing intervention whereas moves by other countries served only to strengthen ISIS and increase their recruitment.

He added: “The facts are telling.”

So what do the facts tell?

They tell us that Russia is the only country involved to date which has the removal of ISIS as an actual goal.

Russia is also the only country with a legitimate mandate under international law.

In addition, ISIS was most eloquently outed by author and journalist Gearóid Ó Colmáin on Russia Today as a US creation.

In this scenario, the reason for further western efforts in the region is looking increasingly like an attempt to prevent Russia from routing its assets or achieving the informational coup that would follow.

France and Britain milking the crises

The propaganda war is hotting up, with western press issuing unsubstantiated and emotional surmise as news.

Meanwhile, the French and the British are now, of course, bombing Syria.

At home, the French government not only voted to bomb but enacted ‘emergency’ powers at the same time. And Holland wants to change the constitution to extend these powers.

The Telegraph states: “The draft “Protection of the Nation” bill […] would extend the right to strip French citizenship from dual nationals convicted of terrorism offences by also including people born in France.

It would also prolong certain powers after a state of emergency was lifted.

No time limit will be inscribed in the constitution under the new proposals. As is currently the case, parliament will decide how long a given state of emergency should last.”

This all looks so like a dictator’s wet dream, it takes an effort of will to believe it has not been planned this way.

And a man no less respected than Dr. Paul Craig Roberts, formerly Assistant Secretary of the Treasury for Economic Policy and associate editor of the Wall Street Journal, has raised legitimate questions about the official line on the Paris attacks.

He says: “European peoples want to be French, German, Dutch, Italian, Hungarian, Czech, British. They do not want their countries to be a diverse Tower of Babel created by millions of refugees from Washington’s wars.

To remain a nationality unto themselves is what Pegida, Farage, and Le Pen offer the voters.

Realizing its vulnerability, it is entirely possible that the French Establishment made a decision to protect its hold on power with a false flag attack that would allow the Establishment to close France’s borders and, thereby, deprive Marine Le Pen of her main political issue.”

The same event, of course, justifies France’s bombing of Syria.

The British government for its part – despite some theatrical hand-wringing – has got on the bandwagon and opted to join in whatever further criminality the US has planned in Syria.

As though to justify the decision, the Telegraph breathlessly informs us that ISIS (or ISIL as it calls it) is planning to attack the UK “next”.

It says: “There are unconfirmed reports that Isil has decided that the next target of an attack will be Britain.

European security agencies, citing specific intelligence that had been obtained, stated that British Isil operatives in Syria and Iraq were being tasked to return home to launch an attack, CNN reported.”

This is the level of the propaganda now: CNN reports security agencies who say that a terrorist group whose name changes every five minutes might be sending members to Britain to do harm.

But this is unconfirmed.

The real reason for this war

I’m going to simplify things: the Plan for a New American Century – a document which was created by neoconservative warmongers in or close to power under George Bush Jr. – listed countries which it wanted the US to attack, namely: North Korea, Iraq, Iran, Libya and Syria.

The journal-neo.org site states: “[all were] pinpointed as enemies of the U.S. well before the illegal war in Iraq in 2003, as well as the illegal 2011 war in Libya and the ongoing proxy war in Syria.”

Retired US General Wesley Clarke went on record in 2007 stating that the fix was in: the U.S. had unilaterally decided to destroy Iraq, Syria, Lebanon, Libya, Somalia, Sudan, and Iran.

This is not some wild-eyed conspiracy theorist. Clarke was a four-star general, and the man who commanded Operation Allied Force in the Kosovo War during his term as the Supreme Allied Commander in Europe of NATO from 1997 to 2000.

The pretence of choice

Any objective assessment of who benefits from attacks upon the countries Clarke mentioned would not include any European country – or even the U.S. for that matter.

But the subtext is clear: if Europeans don’t want to take part, terrorist attacks will be allowed or contrived until they acquiesce.

In short: the ruling elite wants this war. Our pretend governments voted it through on the nod. And we the people will have to deal with the fallout and put up with random terrorist acts if we wake up and speak out about how this charade is rigged.

At the same time, the people of Syria are subject to bombing raids by the US, France and the UK – none of which have any invitation from the legitimate government of that country – actions which, properly speaking, are acts of war against the country the perpetrators claim to want to help.

My prediction: the clean-up operation Russia initiated and Assad approves of will be made to fail; terrorism will increase and spread into Europe; and mass immigration from Syria and that area to Europe will continue; and acts of terrorism on European soil will magically justify endless war, internal lock-down, wholesale surveillance, detention without trial, and troops on the street.

And this – in the absence of hard evidence based in action to the contrary – I can only see as the actual plan.

Do you remember voting for that?