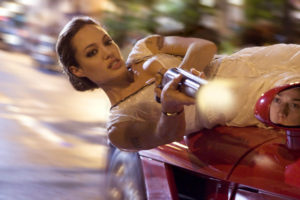 Review top sheet: Wanted is a fusion of the least interesting aspects of The Matrix and Fight Club with a smattering of Spiderman.

General comments: this is a film-by-numbers constructed around the wimp-to-hero template which Hollywood churns out with mind-numbing regularity.

A young loser is trapped in job he hates (that’s supposed to be us, guys). From out of the blue, he receives the call to join a band of psychopathic turbo-charged assassins and murder arbitrarily-chosen people he has never met instead. Obviously, nothing could be more attractive, his God-given right to excitement and “fun” having been stifled by a regular nine-to-five job.

I say the implication of the message is too strong to be ignored: only by killing complete strangers can one achieve existential significance, relieve the tedium of life in the human anthill, and stand a chance of kissing Angelina Jolie. The US Army recruiters could hardly wish for better psychological support.

Paranoid? Possibly, but that doesn’t change the facts as they stand. Most of us – especially the more disposable ones among us – are bored out of our minds, our lives lack deep existential purpose and – apart from Brad Pitt – no one I know of has kissed Angelina Jolie recently. Perhaps joining a death cult managed by manipulative psychopaths would be the way to change all that. The US government has a several more wars it wants to start and – absent a revived Draft – the Army needs all the help it can get to put the boots on the ground.

We are habitual watchers. But to grow the soul needs to act, not watch. When we watch rather than do, the soul acts vicariously. We assume the point of view of the hero and make his life our own to some degree. Every story has within it an argument. Or you may call it the moral. Once we have adopted the hero as a part of ourselves by identifying with his opening predicament, it is hard not to be driven to his conclusions – especially, if the story is good. This is one of the ways effective propaganda works.

I was able to swat away easily any vague need to murder lots of people I don’t know. Perhaps it is because I have an interesting and varied work life; or because I’m too long in the tooth to be gulled by such tripe; or because the story here is rubbish.

Or maybe it’s just that I don’t fancy Angelina Jolie much.

Story comments: a poor plot which seemed to have been constructed using database-designing software: the whole thing does fit together neatly, but there are no cracks for reality to seep in anywhere.

Acting comments: I really like Morgan Freeman. He has natural gravitas. I want to believe he is as wise as he seems. But he’s just reading words off the page, and if those words are stupid, they make him stupid, too.

Substance comments: this film has no substance, it has propaganda. But even that is very weak. This film did not make me want to go and blow people up to invest my life with meaning. It made me want to go and sit in a field a long way from any man-made sounds and look at the sky.

Film craft comments: lots of special effects, super-cool shots, etc. Absent a great story and characterisation, I find it all very tedious – like having a persistent and ineffectual hypnotist in your face.

A taste of the story: get a life by relieving lots of people you’ve never met of theirs.