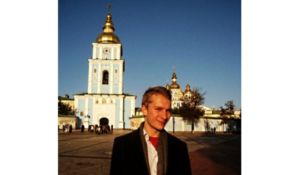 Tim Bobak is from Wimbledon, London. After preparatory school, he went to Winchester College where he was exposed to Russian at an early age, and made his first solo trip to Russia at sixteen.

He studied Russian and History at university at UCL spending five months in Moscow and a further five months in St. Petersburg. While a student he did an internship for a foreign company in Moscow.

He has been back here four months since completing his studies and is working as an analyst for a Russian company.