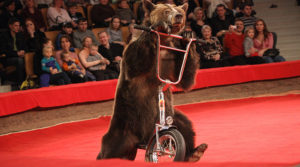 According to sections of the British press, war with Russia is imminent.

In the context of collapsing economies, Brexit, mass immigration and cultural meltdown, the prospect of war with Russia is scary – perhaps even petrifying – but as long as it happens somewhere else, the impression gained is that it won’t be worse than the recent spate of creepy clowns.

To take the yellow press first, on October 13 the Sun ran a piece entitled: WAR READY Putin orders all Russian children and relatives studying abroad to return to the ‘motherland’ as he ‘prepares for WWIII’.

This seems conclusive enough. May as well shaft the mortgage payment this month and go shopping.

Russia then, according to the Sun, is ordering all officials posted abroad to remove their children from schools and return to Russia immediately. The source is cited as “local [i.e. Russian] media” but no link provided.

Supporting evidence is implied by the fact that Putin cancelled a scheduled meeting in Paris “after Hollande accused the Kremlin of war crimes in Syria.”

But even a generation with minds addled by endless distractions and indulgence is able to grasp a distinction between a cancelled meeting and all-out thermo-nuclear war – or, at least, so one assumes.

The view of “ultra-nationalist” Vladimir Zhirinovsky that Trump’s election as President is all that stands between us and war shores up the article.

The Express mirrors the Sun’s hysteria in a piece dated October 14 which rejoices under the title Vladimir Putin issues emergency call to ALL Russians to return home amid WORLD WAR fears.

The tagline reads: RUSSIA’S Vladimir Putin has issued an emergency decree that all officials urgently repatriate any family members living abroad amid fears the world is about to be plunged into a new global conflict.

And what follows repeats, in essence, what the Sun ran with.

This same basic story has been repeated also by Fox News and is found quoted ad nauseam by bloggers and the like further down the food chain.

The Express piece cites “reports”. But the only source is the Russian-language site znak.com – a subject to which we shall return.

The broadsheets are hardly more restrained. Their tack is different, but their bearings are the same: war with Russia is coming.

The Independent features former cabinet minister Andrew Mitchell who compares Russia’s actions in Syria to those of the Nazis before World War II.

The unsubtle conclusion we are left to infer is that Putin is the new Hitler.

Everyone the Establishment doesn’t like is the new Hitler – whatever we mean by that term. Its use merely signals to the masses who is to be the new target – be it economic, cultural, political or military.

And while we’re about it, what we mean by the new Hitler is someone we must now attack without for a single second considering if perhaps he has a point.

Less than a year ago the Telegraph ran a piece which featured a quiz where readers are invited to guess whether Hitler or Donald Trump said a particular thing. So Trump is also the new Hitler. Putin is the new Hitler. I expect after this article, I will be the new Hitler as well.

The Independent ran a piece proclaiming Russia accused of ‘posturing’ as its warships head for English Channel.

That’s it. Russians are about to storm the beaches of Kent. Where’s Churchill when you need him?

Meanwhile, in the Telegraph, Boris Johnson – the UK’s new Foreign Secretary – displayed a cool head and undeniable facility for international diplomacy by labelling Russia’s actions in Syria war crimes and calling for protests outside Russian embassies.

In public relations terms, the anti-Russian sentiment outlined above comprises what is called a campaign – that is, a coordinated and strategically cohesive presentation featuring particular messages intended to create a shift in the (usually unconscious) perceptions of target audiences.

In my opinion, there is little one reads in the mainstream press which is not part of a campaign. Campaigns are designed to create impressions; people like to claim that facts underpin their decisions and opinions, but they rarely do – especially among those with no background in logic.

For their part, Russian public relations teams seem finally to have grasped that what works with Western audiences is not arguments or facts but simple name-calling. Accordingly, they are now using the term Russophobic to rebut parts of the current media frenzy demonizing Russia.

But perhaps we should consider the facts.

There is no statement anywhere in the official Russian press which confirms the claims made by the Express and the Sun, and echoed elsewhere.

TASS is unequivocal. It states: Peskov does not confirm a recommendation to officials to limit children’s schooling abroad.

Dmitry Peskov is Putin’s press secretary. He speaks for Putin. And Peskov said on this subject – and I quote – “I have neither seen nor heard anything like that.”

The source which TASS refers to is the same znak.com mentioned above.

RIA Novosti – itself a state-owned news outlet much like the BBC in the UK – confirms the TASS position: nobody of any substance has heard of such a thing, and the only source for the yellow-press portion of this furor is, again, znak.com.

The original znak.com article was penned by one Ekaterina Vinokurova. Vinokurova is hardly a Putin fan-girl, as may be deduced here if you speak Russian. But to judge on the basis of the merits of the article rather than its writer, the piece in question is modest.

The story suggests that political discomfort exists that the children of the Russian elite are being schooled abroad. After leveraging anonymous sources, Vinokurova explores opinions held by relevant persons on the question of whether such a tendency might not be compromising.

Such sentiments have surfaced in Russia since the time of Peter the Great. And when put in context, this story corresponds to a scenario in which the British elite began sending its scions to be educated in China rather than at Eton.

The piece closes with remarks considering the effects of the cold economic war via sanctions conducted by the U.S. and its allies to drive a wedge between Putin and the Russian elite, but there is no talk of an impending hot war.

To return to the piece in the Independent about the “Russian warships”, the fact is that Russia is sending its only aircraft carrier to the Mediterranean by the same route it always uses when it sends a ship to the Mediterranean from northern Russia – a fact which the piece tacitly acknowledges some way below the salacious title, where an unnamed Royal Navy spokesman is quoted as saying: “UK and Nato assets routinely monitor warships from other nations when they enter our area of interest and this will be no different.”

And readers of the Sun may not know that Zhirinovsky – while a longstanding member of the Russian Duma – has never formed a part of any government in the Russian Federation. His party, LDPR, has only 3 seats out of 170 in the Federation Council and less than one-tenth of the seats in the Russian Duma. And Zhirinovsky – while a skilled rhetorician and showman – is famed for outlandish and inflammatory statements, such as the one about Trump. He occupies a position in the Russian political landscape which combines the offices of court jester and pet bulldog, and while his views may entertain the Russian leadership, they in no way inform or reflect government policy.

I return to Andrew Mitchell, the UK’s former Secretary of State for International Development, since my perception is that his message is the real payload in the current campaign, whereas the rest is merely the delivery system.

Mitchell is quoted by Press TV as saying to the BBC “[…]if shooting down Russian jets ends the conflict in Syria, then that is what Britain and its allies should focus on.”

We non-military specialists have a polarised, primitive conception of warfare. Our conditioning references sports: two teams duking it out until the bell – after which points are totted up, winners announced, and the final score recorded.

But modern warfare is not like American football or ice-hockey. It is like a child’s kaleidoscope; an ever-changing chimera of refractions and illusions which serves to keep the less intelligent observer engaged in turning the tube because it is distracting – and the more intelligent observer engaged in trying to guess what part of what he sees is real.

The object of the present media noise, in my view, is twofold. It is to make shooting down Russian jets seem relatively yummy in the eyes of dissolute Western audiences – at least when compared unconsciously to the prospect of all-out nuclear war – and it is to manage an incremental escalation in the long-term project of war with Russia without spooking the herd.