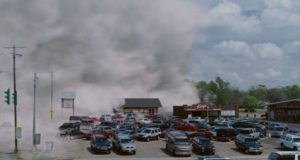 Review top sheet: a thriller which will make you feel nervous, depressed and possibly suicidal – why do it to yourself?

General comments: The Mist both embodies a failing of – and serves as a sort of metaphor for – America. In it, the descendents of this once-great nation of self-reliant frontiersmen are found wandering blankly round Wal-Mart sucking on Prozac, representatives of a Telly-Tubby society where the only outlet for hunter-killer instincts is in getting to the bargains shelf first.

As things get underway, these clinically-dense couch potatoes flap about with increasing levels of hysteria as the forces of evil rack up against them. I know we’re supposed to care what happens to them, but I just don’t. Despite the noble-sounding liberal platitudes we have drummed into us from childhood, the fact is that stupid, weak, dissipated people have no inherent right to keep shopping and eating and watching ad infinitum. They can do it only because the smart, powerful and motivated choose to let them. In The Mist, smart, strong and motivated forces are out to eradicate the weak. But for me – despite all the screaming – it is less an invasion by evil of the natural order and more a logical process of trimming the fat. You could say I’m on the monsters’ side.

If the people had taken more care of their Constitution – especially as relates to the right to bear arms – this would have been a pretty short film: threatening forces appear in a small American town; everyone pulls out a shotgun and blows their heads off and then goes home. Some spotty kid gets the job of mopping up the blood. The end.

A word of warning: the concluding moments of the film strike well below the belt. Technically, it is called deus ex machina, which basically means an event not fully justified by what has gone before. I felt it was unfair and a breach of contract by the director with the viewer. I suspect they shot several endings and then ran a series of focus groups to see which one would fly. I found it horrible and resent the fact that I polluted my mind with it.

Story comments: well, they are all the same, aren’t they? Horror films have one basic plot: a group of morons ends up spending the night in a deserted house with one candle, two matches and a horde of blood-drinking ghouls loitering on the porch. At some point, one of the retards decides he will take the candle into the howling storm outside to get something he doesn’t really need from the car. I say: hurry up and die, because you’re too stupid to live.

Acting comments: irrespective of the problems inherent in the genre, the acting here is good.

Substance comments: dramatically, the themes of denial in extremis and social power were excellently treated. While this is not my genre and I tend to want everyone to die as quickly as possible so I can go home, this film has real dramatic merit and is interesting in those terms.

Film craft comments: lots of special effects. Both the effects and aspects of the film as a whole owe a lot to the Aliens series.

A taste of the story: a freak storm unleashes a species of blood-thirsty creatures on a small town, where a small band of citizens holes-up in a supermarket. It may be a fight to the death, but at least there’s plenty to eat.