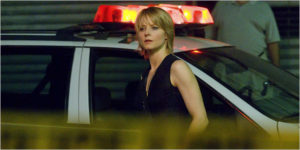 Written by: Roderick Taylor & Bruce A. Taylor and Cynthia Mort.

General comments: The Brave One has the heroine killing off bad guys in the big city. Everyone knows this. And the cinema was packed with women eager to watch and learn. I felt like I was at a Women’s Institute meeting waiting for Charles Manson to come on and give a talk.

The first act is slow and a bit annoying with Jodie Foster truly, madly, deeply in love. Her ageless, androgynous, young-little-old-lady-with-a-thyroid-problem thing is cut of a different cloth, however, and seeing her do “lurve” is a bit creepy, really. Something like when Tony Blair does compassion. You know the script calls for it, but you can’t help feeling embarrassed for their inability to commit convincingly to emotions you just know they do not possess.

But use the time wisely: slurp and chomp your way through the overpriced muck cinemas make their real money on for the first twenty minutes, chuck the cartons and wrappers on the floor and wipe your hands on the seat in front. Then sit back and strap in. Because one of the best thought out and most interesting films you are going to see this year is about to begin.

Story comments: Thrillers have had to reinvent themselves. For years, they were variations on a basic plot which has subject or subjects in a secluded house at night with nasties tapping on the windows. Then someone just has to go out to get something from the car – usually armed with nothing but a candle. It only works if you care. And I don’t. I want them to go out. They are just too stupid to live and I’m on the nasties’ side. I want them to get lunch.

This film does none of that. The Brave One is a fully satisfying journey – and you don’t have to put your brain on ice to enjoy it.

Acting comments: Jodie Foster is a consummate actress. Her lack of Hollywood beauty, her troubled psychological underbelly and evident intelligence all endear her to me over the standard perfect airheads. Here, as Erica Bain, she matches her great performances in Taxi Driver or The Silence of the Lambs. I never noticed what a wonderful voice she has before – a bit like Clint Eastwood’s but thinned out in a solution of estrogen and nail polish remover. If she ever gets her own radio show, I’ll be tuning in.

Terrence Howard is delightful as Detective Mercer, and his almost Dostoevskian relationship to Foster’s character (I’m thinking of Crime and Punishment) is interesting and mercifully free of any of the ‘lurve’ which the producers clearly believe we need to swallow in the first act before we can get the rest of the film.

Substance comments: Personally, I have no problem with shooting people in particular circumstances; to protect the life of a child would be an obvious one. And it is refreshing to have this question sifted before us in a sensitive, intelligent way.

The film also humanises vulnerability and fear in a brisk and non-sentimental manner while raising searching questions about ultimate justice in a world where, increasingly, the citizenry is being disarmed and left dependent on an overwhelmed police force. If the system won’t help you, then you how wrong can it be for you to help yourself?

Film craft comments: The visual presentation is great, but the music has to carry the story in the absence of any reasonable emotional involvement on our part over the first twenty minutes. But you’ll be eating your popcorn, so who cares? The foleys (noises other than music) were spectacular, however, and one of the real advantages of cinema over DVD.

A taste of the story: Erica Bain (Foster) is brutally attacked and her boyfriend killed. She needs to feel safe again in the big city.