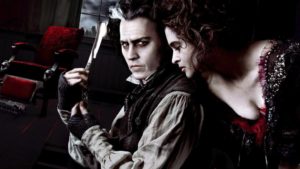 Review top sheet: Sweeney Todd: The Demon Barber of Fleet Street is dark, unnatural, gory and fundamentally revolting – and a musical. This makes for an interesting combination if you have a strong stomach or a very warped sense of humour and are at ease with people singing their way through life.

General comments: any film which calls itself Sweeney Todd: The Demon Barber of Fleet Street is not shy about its content, so lets get that out of the way: Sweeney Todd is a fictional character who appeared in English literature around the middle of the nineteenth century. He is a barber who – driven by vengeance for Life’s cruelties towards him personally – takes to slitting the throats of his customers. His accomplice, friend and lover – Mrs Lovett – chops up the bodies and makes pies of them which she sells. So, we have murder, collusion, vengeance, possible insanity and – oh, yeah – wholesale cannibalism. Personally, I’m alright with most of that list, but the cannibalism turns my stomach. Be warned: it's vile.

The film looks amazing. The director (Tim Burton) cut his teeth on such films as Edward Scissorhands and Batman and knows how to give a picture atmosphere. The lighting, computer graphics, sets, make-up and costumes are, frankly, superb: dark, ghoulish, menacing and beautiful.

Musicals have their own rules. They are not simply broken down into discrete pop videos (although that idea has been tried). They are more messy than that; songs are left unfinished and refrains repeat throughout the film. It’s more like a symphony where some motifs pop up in more than one act. When combined with set dance pieces – for example, Chicago – the result can be highly satisfying. Here, for some reason, it was not.

The highlight for me was Sacha Baron Cohen – whom you either like a lot or despise. I think he is very talented, although I don’t believe his is a talent the world would be the poorer for being without. If you are from Kazakhstan, this film will hold a particularly satisfying moment for you.

I rate Johnny Depp highly. He puts himself into some interesting projects – some commercial and some not. His Dead Man, for example, is one of my all-time favourites. Sweeney Todd: The Demon Barber of Fleet Street is similar in that it is unpleasant in most of its specifics, but succeeds at the overall level of texture.

Story comments: a strong enough story if you can get past the revolting nature of the content.

Acting comments: I didn’t love the performances – mainly because I find musicals a bit annoying by definition. But I still found myself being impressed by the overall result.

Substance comments: vengeance, inhumanity and unnaturalness – a combination sure to get the punters in.

A taste of the story: a man returns from forced labour abroad to find his wife gone and daughter made the ward of an evil judge. He responds by opening a barber’s shop and murdering all his clientele and singing a lot.