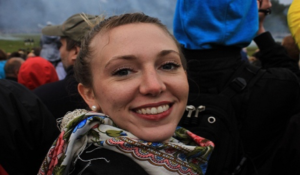 Liz Bagot is from Kansas, America. From a Catholic background herself, her childhood was spent among assorted protestant-derived fundamentalist movements in the Bible Belt.

Highly focused at school, she excelled, and began competing in domestic extemporaneous speaking competitions where she eventually placed second in the state and twelfth nationwide.Liz has always thrived on challenges and set her sights on getting into Stanford, and there she studied International Relations.

Despite her great enthusiasm for Russia, when she first came to Russia she hated it. However, after some time in Chile and doing other things, she decided she was not allow herself to be defeated and came back to conquer.

Liz is now in Moscow studying for her Masters in International Business and working as a business translator.