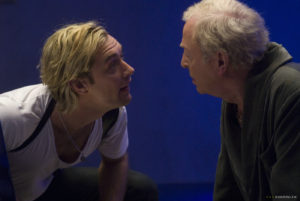 Review top sheet: a remake of the 1972 classic of the same name (in Russian: Сыщик). Like most remakes in cinema (and cover versions in music), the tribute is less impressive than the original.

General comments: this is based on a play with essentially two players in which a man who loves games and theatre (Wyke) invites his wife’s lover (Tindle) to meet him, setting up a potentially deadly battle of wits. The 1972 version was based on a Broadway play and starred Laurence Olivier as Wyke and Michael Caine as the younger Tindle. In the modern version, Caine is now Wyke – a fact which is kinda interesting in itself. But any deep interest for me stopped there.

I don’t see the lack of characters or set-changes as a problem. I’m in it for the drama rather than the fireworks and visual frippery. Cinema versions of plays put together on a shoestring can work brilliantly – Linklater’s Tape, which has three players and is set in a small hotel room, for example. Or his excellent Before Sunrise and After Sunset – which are essentially conversations between two players. These films knock the spots off many billion-dollar productions. The technology of cinema can certainly add something to the play format, but when it attempts to replace it entirely it begins to bore me. I’m there for the drama and the lessons on life.

The plot of Sleuth is well known, but if you don’t know it, skip this section. A famous writer’s wife has left him for another man. The writer invites the lover to his house and they do intellectual battle. Eventually, the wife returns to her husband. For me, the parallels with the Georgia situation were uncanny: Wyke – the long-suffering husband – is Russia. The slick, double-talking fornicator who has wheedled his way into the affections of the man’s wife and convinced her that she would be better off with him is obviously the US. The adulterous wife whose head has been turned by subtle promises is Saakashvili. The wife, ultimately, is better off with her husband, but when she does eventually come back, the old conditions will never be regained and she will be a lot worse off than before she went walkabout. With all this in mind, I found the end of the film both disturbing and strangely satisfying.

Story comments: the plot has been extended and supposedly beefed up to make it more interesting to modern viewers. But it doesn’t work. The first half of the film is convincing enough, but once the unmasking has occurred, it’s downhill all the way. The attempts to up the ante fail miserably. There are some homosexual undertones later on which I found inappropriate and, frankly, silly. Jude Law hams it up and the effect is ludicrous. The ending is sudden and devoid of tension.

Acting comments: Michael Caine is a great actor. He plays the jilted older man well. Jude Law, however, did not convince me.

Substance comments: I liked the way the film allows your sympathies to go either way. There is no clear baddy. You relate to the one your age and life experience makes you closer to.

Film craft comments: they have tried to give the film a modern feel by means of interior design and gadgetry. It’s okay as far as it goes, but does nothing to compensate for the problems with plot after the midway point.

A taste of the story: when you break the rules there are consequences.