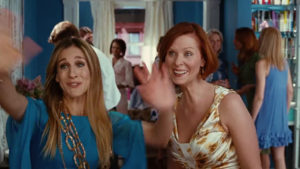 Review top sheet: women who liked the series are going to see this movie anyway – just don’t make the men in your lives sit through it, okay? They won’t like it. Films like this leave men just two options: fall asleep or sit there making snide comments all the way through. Personally, I would have happily read a book, but it was too dark.

General comments: I went to see Once at 35 mm which was great: a roughly made, excellent film with some top songs. I was tired of slating everything I see and looking forward to writing a positive review. Unfortunately, its short run has just finished so I have to write about Sex and the City. If you enjoyed the TV series, I suggest you just skip to the cartoon section, because you’re not going to like anything I have to say about this film.

Here, four moronic middle-aged bimbettes negotiate their way through what they take to be life, wandering insipidly from one café latte to the next. Occasionally, major stuff happens to them: the waiter brings them cappuccino instead of latte, or a they break a nail, or it starts raining just as they leave the beauty salon. On the backdrop of such resolve-testing drama, Carrie Bradshaw is all about getting married. And her friends are all about creating a drama to go with it.

But Carrie’s not twenty, she’s forty. And if the film were about what hell it is being an old maid and trying to get someone to take you on at that age, it might have been interesting. But is isn’t. Being a childless, forty-year-old teenager fluttering about as she prepares to marry is put forward as somehow cool; something to aspire to.

Let me address this ludicrous propaganda. Time is crueller to women than it is to men. An older man can be still be physically attractive if he’s clever or original in some way, but the same holds true for women much less often. Sean Connery and Faye Dunaway are about the same age, for example. I rest my case. Whatever looks a woman has are going to fade big time after twenty-eight or so. In natural circumstances, women intuit that they must leverage the attractive portion of their lives to land a mate and have children. Then, of course, they can chill out a bit and concentrate on developing a career and a personality so that when their looks go completely to hell, they have something to fall back on. It’s a simple matter of getting their priorities in order. Sex and the City attempts to distance the female viewer from this truth, and it does so in the way of all effective propaganda: it assumes the conclusion it wishes you to reach as a precept on which the “story” then unfolds.

I am here to disabuse you of the precept: if you’re a twenty-something female now and think that life will be as kind to you when you’re forty as it is to Carrie (absent some realistic forward planning), you are setting yourself up for a very rude awakening. Being a dried-up, forty-year-old retard in a frock is not an attractive proposition on the marriage market of any planet I know of.

Acting comments: if you take it as a parody, then it is quite funny in places.

Substance comments: there is no real substance.

A taste of the story: Carrie is getting married – amazingly.