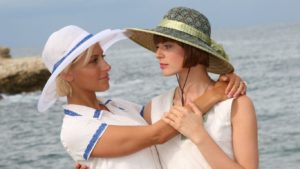 General comments: an odd film. It felt as though nobody connected with it really knew English properly. At a minimum, I would have said that the director was working from a script written in a language he didn’t understand. But apparently he’s from Croydon, so it can’t be that. Nevertheless, even the native English speakers in the film have the sing-song voice quality of cult members or people whose parents worked in the diplomatic service and dragged them all over the world. Whatever, the words are simply repeated – apparently without full understanding – rather than being owned and seeming to originate with the speakers.

The film was made by a Ukrainian company, so I began to wonder if the script had been written in one language and then translated into English – but apparently not. It was written by said Mr. Crombie in English. Very curious.

This film promises sex. You can’t go wrong with that as a selling ploy. But does it deliver? Er, not really. But that’s not all. There are plot points which are so divorced from reality as I perceive it as to be farcical. For example, the lead male stomps off in a huff because his attractive young wife wants to introduce another equally attractive young female into their bed for both her and his edification. I’m sorry, but I failed to grasp what exactly it was that he was annoyed about.

To echo my comments last week, finding new films in English in Moscow has become next to impossible. October Cinema has stopped showing films in English altogether, 35 MM has taken to dubbing them into Russian, and Kino Pod Kupolom shows probably the most banal films in the universe for about six months at a time (it services an international hotel which has a high turnover of guests and therefore has to pander to the lowest common denominator). I’ve even phoned all of these places and tried to move things along in my favour, but as a customer in Russia I am yet to fully internalise the fact that what I want doesn’t count in the slightest. Even the formerly solid underground market in DVDs has largely dumped English in favour of Ukrainian (which makes sense from their point of view) and the licensed market (i.e. exactly the same as the underground market but costing four times more) is no better.

If this column mutates into something else or disappears entirely, you’ll know why.

Story comments: you can think of the story here as a stripped down demo version of John Fowles’ excellent The Magus spliced with a soap opera and wrapped in a few pages ripped out of a travel guide.

Acting comments: for me, Shiryaeva was the best of the lot. Lively, vivacious and intelligent, her motivations made a lot more sense to me than anyone else’s in the film.

Substance comments: if this film is about anything, it’s about the dangers of going on holiday for too long. There is really nothing to do once you’ve swum in the pool, walked by the sea and found out where the shops are. Except go to bed. And once you’ve exhausted the possible options of that pastime, what’s left?

Film craft comments: the execution was professional enough, but somehow the whole thing had not been thought through properly. Perhaps it was a money-laundering operation. That would certainly explain a lot.

A taste of the story: young American newly-weds go to Lesbos for their honeymoon and get really bored with each other.