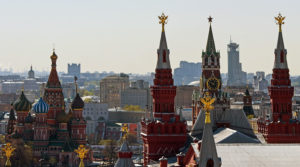 Each leader the West wants to take down is really the same stock character brought back in slightly different attire after the commercial break; Saddam, Gaddafi and Assad are all the same guy: the archetypal Darth Vader to our Luke Skywalker.

Within this simplistic, childlike meta-narrative nothing the baddies do can be good. As those in charge of our propaganda know, the vague, malevolent force which characterizes all our baddies is a much better reason to attack them than anything based in reality. Thus, baddies have no convincing backstory. They are evil because… well, just because.

And that is precisely why they must be overcome.

While the West had other countries to trash, it let Russia slide in and out of various tenuous sub-plots. But now that Western enemies in the Middle East are burning nicely, the script has space for the development of a new central baddie as the prelude to… Well, we all know what.

One struggles to remember a time when Russia could do anything right in the eyes of Western media.

It liked the end of the Cold War and the Yeltsin era when Russia was handing over the nation’s wealth to non-Russian interests; a people elbowing each other out of the way in a fight for shiny trinkets – that was acceptable.

The pre-story to that drama was the deal Gorbachev cut with the US. Under Gorbachev, the US promised not to encroach on Russia’s sphere of influence – a fact now denied by the US, naturally. But at the time it was true, and it gave Russia the confidence it needed to let Communism go and allow personal initiative to find a level.

Fast-forward thirty years and NATO is busy filling Poland with troops, and claims outrage when Russia monitors its activities in the Baltics. However, when the people of Crimea voted overwhelmingly to re-join Russia, this result was rejected by Western media as lacking any legitimacy.

Russians now get it that in the post-Soviet stage play called 'international politics' anyone with traditional values who doesn’t clap wildly when his own side takes a hit will be hissed at while the piano clangs away menacingly in the corner. They understand that talk about fairness, democracy, choice and equality is just that: talk.

They have seen how globalism works. And – unsurprisingly – they aren’t interested in much more of it.

In a BBC piece purporting to measure attitudes towards what it calls ‘global citizenship’, Russia is identified as the most backward country on earth.

Feeling like a ‘global citizen’ (i.e. having abandoned all the values your grandfather would have laid his life down to uphold) is assumed by the BBC to be the very definition of virtue.

Spain is found to be the country most wholeheartedly throwing itself over the cliff-edge, with what the piece calls ‘an eye-catching majority’ of 84 percent believing that they should take in more of those ‘fleeing the five-year civil war’ in Syria.

The fallacies are instantly obvious to anyone with a functioning brain: Syria’s ‘civil war’ is entirely the result of sustained attacks by western money and mercenaries, and four out of five ‘refugees’ are not from Syria.

Syria was slated by the US for what it calls ‘regime change’ i.e. unilaterally going into a country which had done it no harm and committing mass murder in order to hand that country over to the same central-banking system which runs everywhere else.

The source for this plan was disclosed by none other than General Wesley Clark.

But none of that matters. The main thing is that globalism is super fab, and if you don’t want more of it, you’re backward and probably deserve the economic war waged against you because you don’t roll over in the face of NATO - or Soros-backed aggression.

Goodies and baddies in Russia

Zbigniew Brzeziński – that master of how things actually are rather than how we are told to think about them – famously said: “Shortly, the public will be unable to reason or think for themselves. They’ll only be able to parrot the information they’ve been given on the previous night’s news.”

He was right. Western publics are nothing if not malleable. Not only is the ability to reason independently largely absent, people also have little or no memory.

And their attitudes towards Russia are no exception.

Having spent the last few years in Europe, I am constantly impressed by how immune to either facts or reason the general population is. People will say in all seriousness that Putin is behind the current invasion of Europe – repeating the claim put out there by former NATO chief US General Philip Breedlove, who has been replaced by General Curtis M. Scaparrotti, a man who is busy moving all his pieces into the very spaces on Russia’s border the US promised never to occupy.

Under Yelstin, Russia was nothing but an economic target; weak and failing, and selling off the family silver for pennies on the dollar while signing wholesale into law legislation handed to it by US NGOs with agendas entirely inimical to those of the Russian people.

Yet in the bed-time-story version of events for popular western consumption, Yeltsin was a goodie. Had his successor continued in the same vein – allowing foreign interests to asset-strip the country – the narrative today, doubtless, would be that Russia is ‘free’.

I have seen enough of how realpolitik works not to expect anything from any government ever – beyond intrusion into my life and the appropriation of a proportion of what I generate. I regard belief in government per se as a sort of weakness. So while I understand westerners who – rightly disillusioned by their own countries – choose to see Putin as a lone hero fighting a rear-guard action against globalism, I don’t exactly share their sentiments.

One can’t help but have a twinge of envy when looking at Russia’s Putin.

Firstly, he is both bright and sober. When a journalist asks him a question, he has the ability to answer it well – and often with humor. Even given the hopeless translations into English in the media, at least some of what is in the original Russian comes across.

Secondly, he is professional. He demonstrates an appropriate CEO-level grasp on his responsibilities.

Thirdly, he describes the world – and acts within it – like a man who regards people in his own country as his principle stakeholders. Whether this is in fact the case is – at least in my opinion – impossible to tell. But it makes for a refreshing and enjoyable narrative.

In the West, we are simply not used to this type of presentation. Given the controlled demolition of Europe, it is clear now to those who retain their natural instincts that those who make the big decisions in Europe are simply acting like traitors.

Thus, at the level of narrative, the Western propaganda machine is left with a thorny plot point to resolve. Since relative to Putin the goodies have made themselves look decidedly Darth-Vadery around the gills, the implication is obvious to anyone who knows how stories work: the Force is now with Putin.

This is highly problematic; a narrative meltdown. The confusion and dilution of the villain archetype mid-drama – as anyone who has followed Star Wars will know – can mean only one thing: that a brand new, conflict-heavy storyline is on its way.