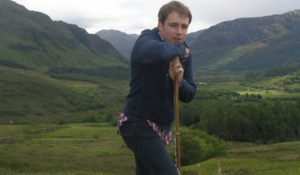 Scott MacLennan is from a small town, Dingwall, in the north of Scotland. He grew up with a love of books and studied English Literature and Philosophy at university.

After his first degree, he went back to study Russian. He came out to Russia  initially with the intention of staying just for a year.

He liked what he found and has now been out here full-time for six years has a Russian fiancée.

He works for the international Russian television channel, Russia Today.