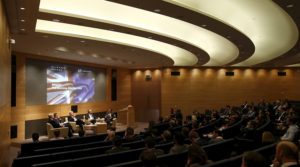 Next month the UK will go through the motions of a plebiscite on whether to stay in the EU. As someone who monitors media rather than believes it, I have found it interesting to observe the use of propaganda aimed at nudging – in the Thaler and Sunstein sense – people towards the ‘correct’ choice.

Thaler and Sunstein’s thesis (found in their book Nudge) is that most people cannot be relied upon to act in their own best interest. What they need is to be guided toward the correct answer.

Along with the rest of the developed world – characterized by Generation Me, the Selfie, and a three-second attention span – the British have little hope of resisting the process of being managed into doing the right thing. And the right thing, in this case, is: voting to remain in a system wherein none of their votes will ever change anything ever again.

One of the key concepts understood by public relations people – i.e. by those people trained in the art of inducing target audiences to think and act closer to an outcome chosen and paid for by a client – is that of ‘opinion leaders’.

Humans are social. Back at school, even before the advent of the electronic pseudo-world, there were the cool kids – those people who seemed to be sprinkled with fairy dust, whose clothes were just inherently better and opinions more amazing than everyone else’s.

But if you were too socially inept even for that honor, it was enough just to have something in common with them.

If the fat boy who smelled of boiled kale and wore his brother’s hand-me-downs supported some less-than-consistently-amazing football team, he was just a doughnut. But if the wonderboy who bore a charmèd life – with his perfect hair, effortless success with girls and God-given place at the center of any gathering of nine-year-old boys – switched allegiance from a Premiere Division team to a bizarre backwater team no-one had ever heard of, that was somehow additional testament to his amazingness, and everyone else wished they had thought of it first.

This is how it works. People, generally speaking, will not – and, increasingly, can not – think for themselves. Instead, they unconsciously wish to associate themselves with those possessed of fairy dust in the hope that some few smidgens of it will brush off on them and make things better.

The people whose job it is to guide the herd toward the correct sheep pen know all this. This is why they don’t bother confusing you with complicated concepts. They know a small – a very small – proportion of people will research questions for themselves, weigh evidence, go for long walks without bits of plastic stuck in their ears pumping out noise, and actually reflect. Those people are an anomaly.Thankfully, we live in a democracy. This means that you can safely ignore that small number of mavericks who use research and individual logic to form their opinions, and rely upon the vast majority which uses neither and just wants to be a bit like wonderboy.

Modern media means that most people – psychologically speaking – are still at junior school. There is an eternal pantheon of cool and perfect wonder kids – people who are just more interesting and sparkly than the rest of us – and nearly everyone wants to be like them. Like the gods of Olympus, they do occasionally come down to the realm of mere mortals – you might see them stepping in or out of a Bentley – but they are aloof, protected, unattainable, perfect.

We will never be them. But we can aspire to be a teensy-weensy bit like them – if we vote to remain in the EU.

The Guardian informs us of the following: Benedict Cumberbatch and Paloma Faith are among more than 250 of Britain’s best-known actors, artists, musicians and writers warning that if Britain were to leave the European Union it would become“an outsider shouting from the wings”.

With just weeks to go before the 23 June poll that will determine whether Britain’s future lies within the European Union, the Sherlock Holmes actor and the Brit award-winning singer have joined a star-studded list of creative figures in an open letter urging voters to back remain.

I’m going to leave the arguments embedded in the piece because they are largely irrelevant. What is pertinent is that public relations specialists know that the masses cannot distinguish between an actor as an individual and the roles he plays. And they leverage that reality to guide their target audience towards the outcomes they have been paid to achieve.

Pop-culture personalities are brands, and Joe Public is programmed to buy into that brand – wonder-boy brand – not because wonderboy knows anything about anything, but because Joe’s existential experience is miserable. He wants to be a little bit special, too.

This Guardian article also leverages another principle of mass manipulation: herd mentality. If Benedict Cumberbatch and Paloma Faith individually or as a duo may not be sufficiently impressive to sway us, the fact that 250 beautiful people all think the same thing is expected to swing it.

How can you with your bleak and trivial existence – with all the color and joy drained out of it – characterized by drudgery, boredom and the absence of hope, be so unrealistic as to think you can back your own mind in the face of the accumulated glory of that many gods? How can your brief, flickering candle from the Pound Shop compete with 250 sets of Wembley Stadium floodlights plugged directly into a nuclear power station and permanently on full-beam?

‘The whirligig of time brings in his revenges’ as the Bard noted. Or: ‘wait long enough by the river and the bodies of your enemies will come floating by’ as the American Indians put it.

Junior school wonderboy’s superstardom may have dropped off quickly to nothing. He may have ended up a few short years later with an acute case of halitosis collecting shopping trolleys in the Sainsbury’s car park for a living. The fat boy may now be trim, toned, have perfect teeth and have sold a tech idea he developed in his bedroom to Apple for a zillion dollars. And now people want to know which team he supports.

Stardom is fickle. But properly handled, it doesn’t affect the business of managing the public mind.

Unlike the Greek gods, members of the modern pantheon do occasionally die – which is a bit of a fly in the ointment – but it doesn’t matter. People’s attention span is now so short and their grip in reality so tenuous that death – even that of a star – is both unreal and almost instantly forgotten. Any sense of loss is really a symptom of withdrawal, a temporary reaction against the fact that production has stopped except for the inevitable release of a Best Of compilation set – perhaps with a couple of inferior b-sides added to make you feel you are not being ripped off.

But this does not assuage a quietly persistent and genuine dissonance: how can it be that someone with so much fairy dust could die? They – it turns out – were not immune. And nor – by implication – are you.

But, happily, you can distract yourself from the conclusions inherent in this uncomfortable pop-culture blip because there’s YouTube where all their really super-fab stuff will eventually turn up.

So it’s not like they’ve really gone away. Their fairy dust has been trapped in an electronic eternity where it will continue to garner hits and opinions, and generate revenue for the unprincipled owners of pirate YouTube channels.

Meanwhile, the vote to remain will, er, remain. And we’ll all have to put up with that – dare I say it? – reality.