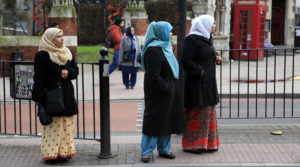 The world of political correctness is ever-changing. It’s hard to remember whom you can’t criticize and for what – whilst remembering to feign blindness to things so obvious you’d need a government education and steady intake of fluoridated water not to notice.

It’s getting so convoluted and complicated even top bosses at Saatchi & Saatchi – people who are paid to create exactly the type of nonsense which is then fed to the rest of us – can’t keep up with it.

Small wonder then that many of us are failing to stay on-message when it comes to Muslims.

Two Muslim women and a Muslim couple were kicked off planes recently. A Christian lady also had the bejesus frightened out of her on a plane when she saw the woman next to her text the word ‘Allah’. In this case, the two ended up having a conversation, and the Christian lady listened long enough to find out that allah is the word Arabic-speaking Christians use for God also.

Meanwhile, a Syrian woman, a psychotherapist from Leeds, was detained under the Terrorism Act as she returned to the UK from her honeymoon in Turkey. Her crime? Reading a book on Syrian art.

The message seems to be: discriminating against Muslims is now okay if you do it on a plane.

Back in their houses, safely behind their net curtains, these hysterical people who get triggered on planes wouldn’t dream of having those they suspect worship a different God arrested and thrown in the slammer. At least, not yet.

But flying is a high-stress situation, and airport processing is designed to be gruesome and humiliating. Airports are training grounds used to acclimatize us for what they are planning to roll out in our streets, shopping malls and offices as part of the project to make a full-on police state not only thinkable but necessary in the mind of anyone who watches the News and takes what he sees at face value.

Muslims are problematical for Western minds in the bizarre and evolving world of self-inflicted psychosis which is political correctness.

When most people – and here I mean most educated, non-Muslim Westerners – talk about Muslims, they are actually talking about race (or races). What they tend to mean is: Arabs and Asians (in the British sense of Pakistanis). But they can’t say that because their own religion – the liberal nonsense created for them by the Frankfurt School and fed into their brains by a suborned media and education system – won’t let them. Such people find surprising the fact that the single country with the highest number of Muslims is Indonesia.

When the wind blows favorably for them Muslims enjoy untouchable status and can move en masse to a nice Western country – either under the rubric of the fact that theirs has been destroyed by the central banking cartel, or because it has been made so unbearable by Traditionalist Islam that no-one with intellectual or economic aspirations wants to live there. Dispossessed Europeans in Zimbabwe or South Africa enjoy no such privileges, however.

The actual purpose of bringing the cultural Muslims into the West had – and has – nothing to do with Muslims themselves. This gravy-train phase still holds, but it is being combined with its corollary: the lock-down phase. And since Muslims tend neither to acknowledge the game plan for what it is nor appear to have a strategy beyond repeatedly playing the card which provided cover in Phase One, they will be increasingly vulnerable to being marginalized as the new 'Reds under the beds' as Phase Two gets underway.

Their problem – like that of all those whose supposed interests temporarily correspond with those of the ruling elite – is that they are pawns in the game. Believing your own propaganda is bad enough. Believing propaganda created for you by those whose strategy includes you only as part of a pincer movement on an unrelated target is, frankly, silly.

In the absence of any aces or royal cards in the game of political correctness, religion appears to pack a punch. But the game is always changing depending on the broader strategy and now you only have to produce a LGBT ace or a protected-race card to consign religion instantly to the bigotry pile. And this doesn’t only affect Muslims. Everyone knows that Gay Rights trumps the Christian Right – just ask any Christian baker or guesthouse owner.

Thus, Europeans who don’t like the agenda attack with religion because they are terrified of accusations of racism. But this is now a weak card. Meanwhile, Muslims parry and attack with both race and religion – not because either is the actual point, but because they sense they have lucked into a game they do not control and which, therefore, can easily turn on them.

Both camps are in fundamentally defensive positions, trying to negotiate the least bad deal they can get in an environment they didn’t design, do not control, and typically cannot understand.

Tribe is predicated on an axiomatically accepted exclusion of the other. Political correctness pretends there is no such thing as tribe and no such thing as other – in fact, it celebrates it and enforces it.

This type of mental contortion does not suit the European mind. We spent centuries being fired up by our banking elite to go off and subjugate abroad; we needed things simple: them and us.

It’s now so complicated that – like Pavlov’s dog under multiple stresses – we just lie down and give up, unable to process the multiple, contradictory and horrifying things which are being done to us.

We are conditioned; we are controlled by archetypes and symbols, and society is splitting into Morlocks and Eloi: those who live below and those who live above ground level in the conditioning process; those who take their downloads by osmosis through entertainment, education and media, and the rest: those who stop and ask one simple question at every stage: cui bono?

Since the contradictions and subtleties are too much for most people, we tend – understandably – to resort to stereotypes. I know whereof I speak. I’m white and European. If I get hassled in an airport when I’m on my own, it’s because TSA goons bring out the sarcasm in me, not because of how I look. But if get checked out online and it is seen that I accept and believe the Qur’an, suddenly I’m a Muslim. But Muslims believe a range of things no less broad than Christians, and for myself I reject all flavors of Traditionalist Islam (whose conclusions have to be assumed and then ascribed to the Qur’an; they are not found organically within it). And this stance damns me as an unbeliever in the eyes of most Muslims.

Meanwhile, my wife dresses modestly. So if she is with me in the airport she stands out on the backdrop of the declining standards of those trained to disregard morality and decency around her; but choosing to dress with respect for yourself and the reality of your sex is not a crime – at least, not yet. But if she decides to extend that modesty to include covering her hair, suddenly I’m oppressing her and we’re packing a suitcase bomb; or I am assumed to subscribe to the Traditionalist Islamicist’s Talmud known as Hadith (which I reject in its entirety) or to favour indiscriminate immigration into European countries from Islamic ones (which I do not) by most Muslims.

Yesterday it was Reds under the beds. Today it is Muslims – whatever we mean by that term. Tomorrow it will be anyone who believes in God or whose moral standard is not sufficiently flexible to meet the changing dictates of political correctness – or just those whose worldview does not fit neatly into one of the little boxes created for us to inhabit in lieu of thinking for ourselves.