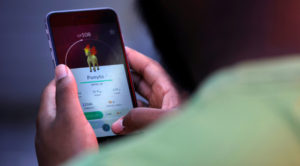 I don’t need simulated drama in my life. When you stand up and speak out, more of the real thing will find you than you could possibly want.

Since I stopped working in the corporate world, I don’t even carry a mobile phone. I have one, but it is permanently in airplane mode, has no sim card, and I don’t take it anywhere. I use it as an alarm clock.

When I go for a walk, I actually look where I am going.

I’m used to being walked at by apparently brainwashed automata oblivious to their surroundings tapping furiously into their phones. I make no attempt to walk round these zombies. If one walks into me I stop and I stand there till it enters consciousness sufficiently to move around me.

But I noticed – beginning in the park a little while back – a new type of living dead. This new model moved with a purpose I had not seen before, and often in a pack. I even saw them running. They seemed to be on an invisible paper chase.

And now I know: they are playing Pokémon Go.

Can you imagine what would happen if you told Generation Me that you wanted it to go around the place and hoover up the last few bits of the earth’s surface not currently covered by Google (also known as the NSA)?

But if you wrap the process up in a game and promote it relentlessly in the media, you can get swarms of people whose daily exercise regimen normally extends no further than getting up to answer the door when a pizza arrives to run – and I mean run – around doing exactly what you want.

This free application has raised the market value of Pokémon’s parent company Nintendo by 7.5 billion dollars.

But how can a free app do that?

Nothing is free. These zombie clusters are unwittingly collecting data and sending it to Nintendo’s servers, which it then sells. Pokémon clearly states in its terms and conditions that it can use the data you provide it to any government or law-enforcement agency it wishes.

The man behind Pokémon Go is John Hanke. Hanke is also behind Google Earth, Google Maps and Google Street View. He did this with a company called Keyhole, which got its funding through In-Q-Tel.

In-Q-Tel is strategically located in Arlington, Virginia, and invests in companies the sole purpose of which is to keep the Central Intelligence Agency and other intelligence agencies equipped with the latest technology in support of US intelligence capabilities.

In short: Hanke’s specialization is making stuff and gathering data for the CIA. And now he has millions of little helpers doing his work and making him richer – for free.

I have no objective data, but when I look at Pokémon players, they don’t strike me as the self-reliant, conservative type into minimal government, personal initiative and responsibility. They look like their range of concerns drops off dramatically at the point of a decent Wi-Fi connection and a new set of ear buds.

I have long been aware that society is splitting along a fundamental fault line. There are those who understand that the whole game is rigged, spend their time researching how it is rigged, and look for ways to prepare mentally, spiritually, and physically for the tsunami of planned chaos which is already breaking on the shore.

Then there are those who play Pokémon Go.

These are functionally irrelevant zombies; unthinking foot soldiers in the army of Mammon; drones of Baal; peons of pusillanimity.

But now their private, stinky-sock worlds based on a small-screen simulation of life have spilled out into the streets, it looks like the zombie apocalypse has begun.

The broadsheet-reading corollary to the zombie phone addict is the liberal.

Both are fundamentally socialistic in outlook: they are highly suggestible, hardwired into groupthink, think virtue resides in numbers, and are suspicious and frightened of reality.

The Guardian recently reported on an event in Hull in the north of England where thousands of expertly conditioned souls were persuaded to remove their clothes, paint themselves blue and allow themselves to be photographed in the name of art.

I was fascinated by this demonstration of mass brainwashing; it was the famous Milgram experiment all over again, which tested for blind obedience and compliance in the face of authority.

And this is why phone zombies and liberals are really in the same camp. Whereas someone with conservative or libertarian values pretty much sticks with his values and deals with life around him as it is, the phone zombie and liberal can be re-molded and re-engineered to accept any set of values you like given sufficient media support and education.

And this seems to be the primary fault line in society: between the majority who like groupthink; those who prefer to be told what to do; those who are happier in the hive mind than in thinking for themselves – and the remainder.

But it is the remainder – those who are left over once the masses have been removed – who are responsible for the ingenuity, inventions, artistic and practical innovations which form the engine which drive society forward.

The kind of people who play Pokémon or paint themselves blue on command are natural followers. They have no inherent genius, and they resent it in others.

And, again, those who pertain to this bigger group are highly suggestible. They can be conditioned to accept almost anything if it is positioned correctly and fed to them slowly. And they always incline towards greater government control, whether it be called Socialism or Fascism or Environmentalism or something else.

Then there are the individualists, those who don’t need government and over-zealous bureaucrats and other functionaries telling them what to do; those who can think without the need for training wheels; those who pick up a gun rather than the phone when they hear the door being kicked in. And these people don’t play Pokémon or take their clothes off and paint themselves blue and allow themselves to be photographed in the street.

As the number and scale of violent incidents increase across the world, the lemming mentality of the herd will incline toward greater conformity and seek sanctuary in greater domination by government. Herd mentality unconsciously revels in a masochistic defenselessness and the willing abnegation of personal responsibility. It is a small, weak, envious child; not only will it not grow up itself, it wishes those who can and will achieve maturity to be beaten.

At the same time, those who do not play Pokémon politically speaking will be forced to eat the consequences of their conclusions as they find themselves increasingly vilified, attacked and persecuted by the zombie herd under the direction of its white-collar corollary: the liberal.

Extrapolation means looking at where you have come from to where you are now and envisaging – given that trajectory – where it is likely you are going.

Where we have come from is a place where huge swathes of young people have been rewired to point and shoot on command at anything which has a point value attached to it in order to make the kind of progress through hardship and levels which is rightly the preserve of actual life. These people have little or no interest in – or grasp of – the social upheavals going on around them. They are supremely obedient because they have obeyed in the virtual millions upon millions of times.

They are also unable to deal with either ambiguity or real-life complexity. A subject is either good or bad. And if it’s bad: shoot it and bag the points to get to the next level.

We also have a management class which is, likewise, highly suggestible and similarly conditioned to hate individuality and non-conformity. It is trapped in a set of protocols based on doublethink which itself runs along pre-laid pathways of emotive trigger words such as ‘hate’ and ‘diversity’, and it is functionally unable to think outside that paradigm.

On that basis, is it so mad to envisage a point where the government issues the zombies weapons which connect with a mobile device and a game in which you go around the streets killing all those who don’t check out in the CIA’s database of approved persons?

Given the suggestibility, conditioned reflexes, ingrained obedience, inability to distinguish reality from fiction – combined with fear of and envy towards real achievement – in the minds of the key players, the pieces are in place for just such an outcome given the right set of crises and media support.

Perhaps Pokémon Go is ‘just’ a data-gathering operation which leverages the naivety and loneliness of lost, solipsistic degenerates with no real war to fight or real points to collect.

Or perhaps it is what it looks like: a beta test for the zombie apocalypse.