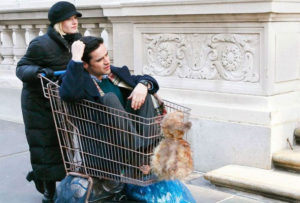 Review top sheet: a soppy chick flick about a really nice guy who starts off being nice, is nice right throughout the film and gets to the end with niceness intact.

General comments: My Sassy Girl is a remake of a Korean film which I haven’t seen but which is supposed to be good. Which is some comfort, because this one is rubbish.

Judging from the thrust of this film, the business heads in Hollywood have convinced themselves that there is a market segment that hasn’t been fully tapped consisting of females between 17-25. Specifically, 17-25 year olds who labour under the illusion that there is a “nice” guy out there for them who will put up with an endless stream of neurotic caprice and will just love them for who they are without making any physical demands. Maybe – just maybe – this is possible if, as well as being highly neurotic and capricious, you also happen to be Elisha Cuthbert. But my feeling is you shouldn’t bank on it otherwise. Elisha’s extremely attractive, interesting and charming – at least in the film. But even so, I still would have left her unrescued, flailing about in a pond somewhere before the end of act one and gone to the pub.

But not so our nice hero. He’s not just nice in small doses like the rest of us (I can generally manage about twenty minutes of it at a wake, and not always then), he’s persistently nice. Relentlessly nice. There is no emotional curve ball our Elisha can throw at him that he won’t catch between two rows of grinning teeth.

But what is “nice”? My definition is: bland congeniality with no definable personality. It’s akin to being “normal” (which is a bit of a cult phenomenon across the Western world). But nice is somehow worse. It’s what we call people who are so boring you can’t even dislike them properly.

I’ve noticed a trend: Hollywood is promoting “nice” as a lifestyle choice for guys. Just when we thought Western manhood had performed all the unnatural contortions of which it was capable, New Man is being reinvented as Nice Man. Too late for me, I’m afraid. I’m cursed with a personality. But I look forward to seeing the archetype being affected by impressionable young men next time I go back to Blighty.

I like being unpleasant some of the time and I’m not planning to change. So perhaps I have a vested interest in believing that women don’t like guys who are “nice” to an unreasonable degree. It ‘s hard to be sure, though – and I needed a second opinion. And since this one was on DVD, I gave it to three Russian girls to watch in laboratory conditions (i.e. without me there simulating vomiting in the background). I got a text message back a few hours later that they all wanted to shoot this guy.

Acting comments: Nice Man is now a feature of the Hollywood pantheon of archetypes we are supposed to measure ourselves against. I feel a bit sorry for the actors who get these roles – but I guess they take the work they can get.

Substance comments: if you are nice enough for long enough you will get the girl of your dreams. Yeah, right.

Film craft comments: well made but without surprises.

A taste of the story: a vivacious, energetic, original (though somewhat lunatic) and highly attractive young woman pursues a young man with no personality or imagination.