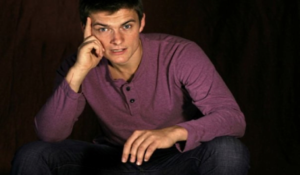 Daniel Medvedev was born in Moscow but moved to the United States when his parents left the country when he was three.

He grew up mainly in Southern California. He began a university with a major in music, before deciding to come to the land of his birth to study drama.

He studied at both MHAT and at the Shukinsky Institute before meeting his mentor, Evgeny Ponasenkov, an actor, director and historian who gave his life new direction and purpose.