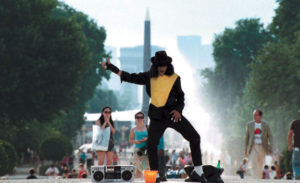 Review top sheet: Mister Lonely is a whimsical, eccentric, meandering story with no real point but a few top moments. It’s a bit like chewing your way through a bowl of healthfood-shop muesli: while most of it is so dull you know it must be doing you good, you still come across the occasional yummy bit.

General comments: I was attracted by the core idea: a sad Michael Jackson impersonator (how could an impersonator be anything but sad given the original material) battling against a world that doesn’t understand him. This was a great idea for a story. The result, however, feels like it has missed something. A bit like a cake which hasn’t been allowed to rise properly, the outcome is lame and disappointing – despite the fact that there are quite a few sweet currents in the mixture.

Samantha Morton is a very strong actress in my book. I was also interested to note that she sports a formidable rack. I mention this not to further infuriate certain sections of my female readership (perish the thought) but because it is a bit of a plot point. This gives you an idea of how threadbare the plot in total is. However, Ms. Morton and her bodily attributes handle the lack of underlying motivation extremely well.

A few moments are wonderfully mad and made me laugh out loud. The spectre of Marilyn Monroe, James Dean, Madonna, Michael Jackson and the Three Stooges – completely straight-faced – decked out in bee nets practicing Tai Chi, and that of the Queen lighting up a cigarette as she lay in bed with the Pope, were two images which really tickled me. And, to be sure, the film is not lacking in good moments. But it does lack cohesion and a really good reason to exist. It’s more an excuse for some wonderful vignettes.

I feel the same way about Oscar Wilde. Genius though he may have been, I find most of his work (if one leaves aside his most successful children’s tales and poetry) exists primarily as a vehicle for his aphorisms. That is the way to get quoted: write short, clever things which can easily be memorised and don’t need a context. Mister Lonely has the same quality. You could take several two-minute slots which, if seen in isolation, would leave you feeling this was a must-see film. The whole, however, does not live up to the promises of some of its parts. Writing excellent moments is not hard. Writing excellent moments which dovetail end-to-end to create an unbroken chain of excellence in the form of a devastatingly great story – that’s hard.

The last fifteen minutes of the film is almost entirely superfluous, and embarrassing to watch. Directors who write their own films almost always feel the need to over-explain what we just watched. A bit like the moment when the policeman asks the detective why he did such-and-such. It should have either been clear from the action or cut from the film altogether. If it needs explaining, it means the film was crap which, ultimately, on balance, this one is.

Acting comments: Morton is greater than the script really allows and does well.

Substance comments: can being someone else help you become who you really are?

Film craft comments: in need of full re-write and an objective, hard-minded editor.

A taste of the story: a sad, Michael Jackson impersonator meets a sad, Marilyn Monroe impersonator and they go off to live in a castle with a load of other sad and utterly hopeless people just like them.