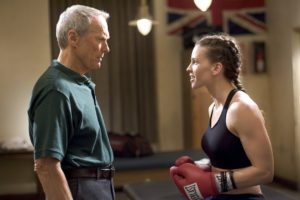 Written by Paul Haggis based on stories by F.X. Toole.

Review top sheet: if film were food this is the kind of place French chefs would come to eat on their day off.

Million Dollar Baby bears comparison with the critically-acclaimed Raging Bull not only thematically, but in terms of creative achievement.

Yes, critics drool over work like this. They love it.

Comments: film critics like talking, and this sort of fare gives them the chance to talk a lot. I’m not a film critic, I’m a reviewer. So I’ll try to keep this short.

The bulk of this film is visually rich in a soulful, pleasingly-sordid 50s way. The acting is convincing throughout; its dramatic peaks and troughs balance out into perfect equations. It sports extremely catchy bluesy-jazzy music (some of which was composed by Eastwood himself – I was impressed, and I think you will be as well) and its themes are poignant and excellently treated.

I can’t fault this film. Which is why I’ve given it full marks on all points.

But not so much because I must, but because I can’t not. But deep, deep down – despite the undeniable greatness of each of the parts – there was a lack for me somewhere in the region of the sum which makes up the whole.

Perhaps, it’s just not my kind of film.

Story comments: a film about a girl boxer.

Had I known this beforehand I might have sidestepped this assignment. Politically-driven indoctrination posing as life-and-death drama turns me right off.

But I’d have missed a good film. A great film, even.

Million Dollar Baby is a brutal-yet-tender, fully-rounded drama for which the subject of boxing (rather than specifically girl boxing) serves as both the occasion and the metaphor, but – mercifully – not the sole reason for being.

That said, the sight of girls beating the living crap out of each other strikes me as revolting and unnatural in a way that men doing the same thing simply doesn’t.

That’s just the way I am.

Dialogue comments: Eastwood and Freeman have become, in effect, the salt’n’pepper grandpappies of Hollywood.

In this film, they bring to their worlds a long and convincing pre-history; the deep, time-soaked quality of a rare double-malt. You can’t fake this kind of maturity. Weather-beaten faces and near-perfect laryngitis like theirs aren’t acquired overnight.

And in Million Dollar Baby we witness the culmination of decades of both their graft and craft. They are, unquestionably, our seniors. So they don’t over-explain to each other for our benefit. It behoves us, mere whippersnappers that we are, to shut up, listen and learn. Which we do. And to great advantage.

Hilary Swank’s contribution to the mix is inspired. A less visionary casting decision here would have sunk this film. Swank more than makes the grade. She takes the film forward.

An achievement by any standards in such austere company.

And this is partly why I think – despite the fact I was not personally ecstatic about this film – it is a great film. It has a wide and genuinely successful range which nudges it into the realm of epic: that elusive category Hollywood breaks its head against time and time again trying to master.

Kids in film school are going to be writing essays on this film ten years from now. And the next generation of screenwriting books is going to feature it. I can feel it in my bones.

Film craft comments: the director of photography has created a work which comprises a series of masterful and thoroughly modern visual compositions. Any single still from a full two-thirds of the film could be used to market anything from safe sex to deodorant. And it is all done in a pleasing, uncluttered, tasteful and nostalgically shabby fashion.

The lighting in this film is breathtaking. There is a grainy, noir quality (yeah, I know it’s in colour) which picks out each line and crevice in Eastwood’s Death Valley visage to marvellous effect. If you’re old and wrinkly, you may as well flaunt it.

There is an experienced, mature directing hand at work here concerned with a broad and reflective purview. The film has both the urgency and mastery of an old man writing his own epitaph. It is, perhaps, Eastwood’s magnum opus-in-waiting.

Swank is brilliantly cast. She’s impressive-looking but rough-hewn. And you just know she’s never had a professional manicure in her life.

A taste of the story: Frankie Dunn (Eastwood) is the best cut-man in the business and a trainer par excellence. If you want to know how to bash someone’s head in, he’s the man to teach you how to do it properly. But he’s made mistakes, and he doesn’t want to repeat them.

Well, we’ll see about that.