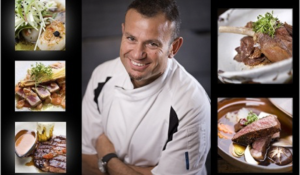 Glen Ballis was born in Melbourne, Australia, and is the youngest of five. His father died when he was young and his mother worked hard to put him and his brothers and sisters though school.

Not having a father to keep him on track, Glen became a bit of a wild child. And though he excelled at sport the rest of school  failed to engage him.

He left school early and began working in kitchens on his way to becoming a chef. He worked under some hard taskmasters and over time has acquired a world-class reputation which has taken his all round the globe, working in, opening and building up hotels in Southeast Asia. He came to Moscow six years ago and opened Nedalny Vosto for Arkady Novokov and is still executive chef there.

He recently opened Roni Asian Grill & Bar where he is the owner-chef.