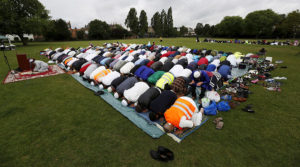 No matter what the question, the liberal response is the same: native Europeans need to understand, ‘celebrate’ difference, and be willing to integrate alien ideologies – because it’s so enriching. But if it is all so enriching, liberals struggle to explain to themselves and others why Islamic communities are not ‘celebrating’ their own differences.

On March 24, 2016, a Muslim shopkeeper – forty-year-old Asad Shah – was viciously attacked in Glasgow. He later died from his injuries.

Naturally, the social engineering project otherwise known as mainstream media jumped – self-loathing first – into the fray. The Spectator’s Douglas Murray – writing on March 29th – summarized the situation well: "Most of the UK press began by going big on this story and referring to it as an act of ‘religious hatred’, comfortably leaving readers with the distinct feeling that – post-Brussels – the Muslim shopkeeper must have been killed by an ‘Islamophobe’".

In the event, it came to light that poor Mr Shah had been murdered not by a white hater, but by another Muslim: Tanveer Ahmed, a taxi-driver from Bradford.

Why? Because Mr Shah had claimed – apparently – to be a prophet.

Seal of the prophets

Islam – a word which in the Qur’an is nothing more than an abstract noun meaning ‘submission’ – comprises today, in effect, a broad political narrative broken up into competing factions. One of the few things they all agree upon is the infallibility of the Qur’an.

The Qur’an says that Muhammad is the ‘seal of the prophets’. Although ‘seal’ can indicate a confirmation of authenticity – and the message given to Muhammad undoubtedly confirms previous prophets – Traditionalist Islam chooses to take this Qur’anic statement to mean that no prophet will follow Muhammad.

Well, okay; let’s assume that view. Surely, the rational response, given such a premise, to anyone who claims to be a prophet – such as Mr Shah reportedly did – would be simply to smile and explain calmly why he is wrong.

Euclid set out the basis for modern mathematics. If someone now claims that twice two is five, stabbing one thus deluded to death does not suggest itself as the obvious response – at least, not if you are sure of your premises.

The vast majority of people from Islamic backgrounds have a cultural rather than ideological attachment to their religions. Most know the Qur’an no better than most nominal Christians know the New Testament. Like most people anywhere, most Muslims go with the flow. What they want is what most people want: a better and more secure life for themselves and their families.

But facts are facts; the more ‘religious’ a Traditionalist Muslim is, the more likely he is to consider it not only acceptable but praiseworthy that those who do not conform to his own orthodoxy should expect retribution; in addition, cultural Muslims are at risk – perhaps more at risk – from the insane brigade as anyone, a fact to which the murder of Mr Shah attests.

Take the case of Rashad Khalifa. Khalifa – an Egyptian who moved to the US – discovered and expounded upon a mathematical code within the Qur’an based on the number 19. Harmless enough you might think.

Khalifa never claimed to be a prophet (Arabic: nabī); but as his calculations progressed, he did claim to be a messenger (Arabic: rasūl).

Technically, anyone who delivers a message is a messenger – and the Qur’an does not contain any statement about messengers comparable to the one it makes about Muhammad being the ‘seal of the prophets’. But the type of people who think errors in judgment merit killing rather than raised eyebrows are not sensitive to this sort of distinction, and Khalifa was summarily stabbed to death in 1990.

Bilal Philips presents himself as a spokesman for Traditionalist Islam. He is not an extremist, nor can liberals claim him to be religiously illiterate. He is a writer and preacher schooled in – and whose audience consists of – a certain bandwidth within the Sunni orthodoxy. But even Philips conflates the concept of prophet and that of messenger in Khalifa’s case, and barely conceals his glee at his murder.

Whereas the liberal narrative must assume that all cultures are equally valid and – given enough cuddles and understanding – will want to live together in perfect harmony, that fact is that the Shah case has belied those assumptions.

The best western media can do when wrong-footed by later events as in the Shah case is to switch the focus to those decent, reasonable Muslims who don’t want to slice people up for having a wrong opinion or for being deluded and foolish – which seems the worst that can be said about Mr Shah. So we have a damage limitation program underway concentrating on good Muslims.

The Guardian’s piece, for example, ignores the actual reason that the murderer himself gave for the attack (that Mr Shah claimed to be a prophet) and focuses instead on what liberals like best: a generalised discussion about the evils of ‘hate’ – in this case in combination with a short tour of tensions between the generality of Islamic sects and a group called the Ahmadis, to which Mr Shah belonged.

And while it is true that the Ahmadis are, generally speaking, both reasonable relative to Islamic orthodoxy and persecuted by it, these are not the salient facts in this case. The salient fact is that Shah claimed to be a prophet and that is why he was killed.

And this is a problem for the liberal narrative. The idea of assassinating a man who says he is a prophet is not something one can claim exists only at the nuttier fringes of Islam – and this is what the liberal press is trying to keep the mainstream from grasping. It chooses, rather, to operate on the same basis on which it approaches everything: the problems with Islam can be solved by the cure-all of attacking ‘hate’ – and assumes Islam in all its manifestations can or should be amenable to a transformation on that basis.

But it won’t. If you go around saying you are a prophet in the world of Islam – or even if you don’t say it but someone thinks you did – you should expect people to be out to kill you. It really is that simple.

Two banks of the river

I was friendly some years ago with a young Muslim who told me his parents had moved to the UK from a squalid and backward village in Bangladesh. The entire village came.

Central to the liberal narrative is the thesis that if you are understanding enough, tolerant enough, embracing enough and do enough ‘celebrating’ of everyone’s differences, eventually people will all come round to being like liberals: gushy, blindly optimistic utopians with a misguided though perhaps well-intentioned set of motives.

This is – at best – a strategy for failure; at worst a cynical ploy providing cover to well-meaning fools to execute a policy of betrayal against their own civilization. To put it in Classical terms, liberals are not only throwing open the gates of Troy; they themselves built the horse and are wheeling it in.

One may understand those Muslims who moved to the west since WWII. Since the ramparts were down, they came in. Why wouldn’t they? In their place, I know I would – it is normal and understandable to want a better life.

But the fact remains that had they successfully built and maintained desirable societies – societies in which you don’t get chopped up for having a wrong opinion, for example – many would have had no impetus to come.

I do not believe that there is any intention to help Islamic communities solve their problems in Europe; rather that they are being used cynically by those who control policy to achieve the cultural balkanisation of European peoples. But if the liberals were serious about helping Islamic cultures in the west, the way to do that is not do defer to them, but to stand firm in the principles of those thinkers who made European civilizations attractive in the first place.

If that does not happen, in time Europe will no longer be Europe; it will be a ramshackle, medieval backwater lost in factional religious infighting, and the liberals – along with the decent Muslims and rest of us – will just have to keep their mouths shut for fear of being murdered by fanatics.