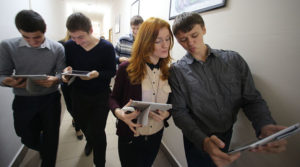 The Internet is the nervous system of a mass control and surveillance grid governing economic, informational and social life. Its chaotic freedom drew everyone in. Now that we’re all plugged in, the door can come down behind us.

In its early years, the Internet was like the Wild West. It was a rugged, shooty-killy kind of place where things were slow and life was cheap. But it was also possible to make a load of money, and governments let things slide while the pioneers performed the huge task of clearing the land.

Now that work is done. The fields are fenced. The plots are allotted. Everything is owned and has a number. The roads are now so wide and so smooth you can drive round large bits of it in an automatic convertible and scarcely feel the bumps.

The frontiersmen have done their work. The city-dwellers have learnt to traverse its highways. The next step is to lock it down.

I have seen the world transported towards increased depravity and tyranny with unfaltering consistency over the course of my life. I have seen evil objectives achieved under the cloak of the purest of motives with such tedious repetition that I now accept fabricated concern for the oppressed as the only possible delivery system for genuine wrongdoing.

The Internet has allowed unsanctioned viewpoints to escape into the ether. Clearly, those at the top of the pyramid want to standardize and geld alternative media as has been done with the mainstream. There remains only the question of which compassionate grounds will prove most fertile for growing that particular crop.

The UK’s Guardian hints at the opening salvo of the coming river of gush which will sweep all right-feeling individuals into the rapids of having nothing but appropriately gelded information to access; the righteous cause this time: the fact that women need to be protected from ‘hate’.

In an incestuous in-house love loop, Polly Toynbee references an article by one of her colleagues who covers “a brave campaign in the House of Commons against online misogyny, with women politicians from all parties. They can expect torrents more online abuse as they call for people to join a consultation on what can be done about the poisonous sexism, racism, homophobia and plain bullying the web has unleashed into the ether.”

Females have their feelings hurt online. It’s tragic. Girls who would otherwise have gone on to become Olympian Nobel-prize-winning physicists have their lives ruined by some name-calling.

Toynbee opines: “What’s to be done? Yvette Cooper’s Reclaim the Internet is exploring the role of police and prosecutors, the duty of Facebook, Twitter and other platforms and the obligations of employers, unions and other organizations to offer protection – all areas where political pressure can get something done. Anonymity allows abuse to flourish, when people would never be so casually rude or nasty in person.”

Somewhat predictably, the problem having been identified, cue the solution: more government. Yes, the very institutions which have most to fear from unregulated access to information are what we need to control that access. And, as ever, they want to do it because they love us so much. This will be the same people who tax us to death on behalf of the banking cartels and send our children to fight their wars so they themselves can sit in a more comfortable chair and wear a nicer suit. Those people.

As ever, they need something vague as an enemy, and ‘hate’ is the perfect candidate because no-one can truthfully claim to be fully free of hate, so you are potentially evil and the best thing you can do is keep your mouth shut. This fact will help those whose job it is to push through the agenda handed to it by the banking class. Their standing orders are to do what they are told while keeping us thinking they are trying – but somehow mystically failing – to achieve a wonderful world.

These puffed up, unconscionable minions are now aiming to shut down those of us who can actually think. And they are going to use vague allusions to ‘hate’ as a key part of their toolkit.

Hate is an emotion. But in this solipsistic, logic-free insane asylum which has become the vocal culture, you can convince people it is a crime. And on that basis, you can induce them to hate the haters. But this secondary hate is not hate in the same way the first type is hate; hating haters is not a crime. It is a righteous and good thing.

The type of people on whom this obvious Doublespeak is lost will not see that the move embedded in this current round of gush is not to ‘reclaim the Internet’, but to control it.

Of course it’s unpleasant to be attacked online. If you stand up and say anything which gains an audience under your own name – along with all the decent people who read your stuff – you will attract a shoal of anonymous bottom-feeding trolls.

Depending on your area of interest and visibility, the specifics will change. Some are paid trolls: working for minimum wage in outsourced sweatshops for bottom-tier government propaganda networks; some crave significance by sounding clever but lack the courage to do so under their own name; some are envious; some are ill; some think that by attacking you they are making the world a better place. Some are simply frustrated writers who – unable to muster the courage to put themselves forward under their own name – feel they can derive a secondary kudos by attacking you.

Is it pleasant? No. In my own case, I’m too busy to care much. If you’re going to climb mountains there is little point complaining about mosquitoes.

But what about Sally the future Olympian physicist whose self-image is destroyed by nasty people saying nasty things? Can I really be so heartless as not to care about her?

Sally is just an excuse. By focusing the gush gun on justifying shutting up all the nasty people who don’t like Sally’s recent experiment in nuclear physics, you can also silence all those pointing out that taxation is theft and that we are owned by an inter-generational psychopathic kleptocracy.

I don’t subscribe to the idea that if enough people ‘wake up’ – to use current parlance – the coterie of unimaginably wealthy planners will just up-sticks and retire to the pavilion.

A group addicted to gadgets, crowd-thought, a steady four-four drum beat mitigated by a very limited set of rhythmic options, and which demands that pint-sized, cloudy and complex questions be served transparently in shot-sized glasses is not the stuff of which revolutions are made. Most wouldn’t sacrifice their iPhone let alone their lives to achieve their stated aims.

But the plan is not to have a lot of unauthorized opinions out there. It is to set up a system which tracks and controls you, and upon which you depend. The next step on that pathway is to achieve the kind of homogeny and conformity online that is now the norm offline.

As it is, I’m struck every time I see a large group of supposedly informed, ‘awakened’ people raging against the status quo. How can it be that so many of the world’s most earnest and altruistic individuals dress in basically the same ways, use the same type of language, and collectively represent a set of concerns which allows for all the subtlety, nuance and range as the menu in a McDonalds Drive Thru?

The answer is that from a crowd management point of view the supposed counter culture is as bland and predictable as other marketing segments such as soccer mums and lawyers.

And this demographic got its worldview from the online world. It may be informed. It may even be right. But from a realpolitik point of view, it doesn’t matter as much as one might wish it did.

The obvious next move now that all the mice are hooked on the cheese is how to dissolve the cheese gradually while keeping them nibbling at the place where it used to be. The Guardian’s articles signal a shift in this direction. Those who gave us the Internet, a system which encouraged wildness and true diversity of opinion in its growth stage, are going – increasingly – to require conformity and uniformity in the consolidation stage as the price of participation.

And they will use what they always use to get what they want: appeals to compassion which only the kind of heartless brute who doesn’t love kittens could ignore.