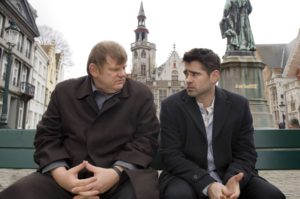 Review top sheet: In Bruges is an extremely strong film with a great plot and top character development. The first half is truly great while the second half is merely very good.

General comments: this is my kind of film. It concentrates on dialogue, character and motivation firstly, and only gets into the frippery of film (great locations, chasing people about and waving guns, etc.) as a function of the primary dramatic drivers.

In it, two Irish hit men are sent to Bruges (that’s in Belgium, home both to Belgian chocolates and the headquarters of the European superstate, neither of which anyone in Europe particularly wants or likes – including the Belgians) to await further orders.

Bruges, it turns out, is a picturesque medieval town (a revelation to most, since – as the film rightly points out – no one ever goes to Belgium) the charms of which impact our baddies in different ways.

But, murderers or not, the lead characters are far from two-dimensional.

Story comments: a great idea fortified and given life by two top actors. However, the script falls into two sections. The first climax and dénouement (about an hour in) round off what, for me, was some of the best cinema I have ever seen. I was ready to call it a night right there. But there was more to come (films can’t just be an hour long, so there had to be more). What follows was good. It was very good. But compared to what preceded it, being very good wasn’t quite enough.

Films don’t work that way. The first hour can be rubbish, but if what follows is top drama, we still come out feeling like we’ve had our money’s worth. And while the action steps up after halfway in In Bruges, the dramatic quality falls off slightly, which is why – despite its undeniable merits overall – the film is conveys a sense of gentle anti-climax.

Acting comments: Brendan Gleeson – whom you may remember as Hamish opposite Mel Gibson in Braveheart – gives a superb, understated performance. His outward stolidity encasing a Celtic warrior’s heart and poetic bent are channelled thoughtfully into the role here: that of mentor-cum-chaperone. Gleeson, incidentally, began acting professionally at thirty-four, after ten years as a schoolteacher. Amazingly, he managed to find the only job in the world which gives you longer breaks than teaching.

Colin Farrel is not just a brat-pack, dark-haired, Brad Pitt equivalent. He’s a great actor. And while both he and Pitt can do accents, Pitt simply doesn’t have Farrel’s command of body language. If you haven’t seen Farrel in Phone Booth, you should: an excellent play beefed up sufficiently to trick mainstream audiences into watching something worth seeing for a change. Originally from Dublin, Farrel relaxes into his role in In Bruges as a tough-bodied, soft-hearted miscreant with naturalness, some relish and the confidence of a top footballer back on his on home turf for a one-off testimonial match. He’s less psychotic here than in his role in Intermission, but some comparison is justified.

Substance comments: the relationship between Farrel and Gleeson is developed organically and explores the conflict which exists occasionally between professional and personal loyalties. The whole tale – morbid in its beginnings – is tinted around the edges with a whimsical romanticism.

Film craft comments: a well-written script, though a little incredible in parts (for example, I found the way Farrel’s character was prevented from making a train journey hard to swallow). Solid direction and cinematography, mercifully absent any need to impress us with unusual angles or special effects.

A taste of the story: killing people can have an adverse impact on you.