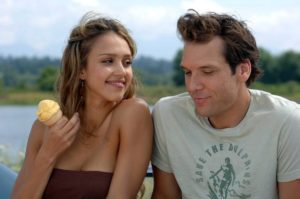 Review top sheet: Good Luck Chuck is a gushy, lurid chick flick studded liberally with bits aimed at the producers’ conception of average guys – which would have been an acceptable mix had the makers of this film had any taste.

General comments: yes, this is a funny film in places – but, for me, that does not justify the fact that makers of this piece of cultural superfluity were unable to distinguish between puerile but amusing on the one hand, and completely revolting on the other. Do not be taking a girl to this film on a first date – or on any kind of date come to that – unless you are absolutely sure that a side dish of base vulgarity is going to do it for her. Had I found myself at this film with a woman I had any intention of seeing again, I would have removed us from the theatre well before the main story got underway and driven her directly to a nice restaurant to make it up to her.

If you must see this film, go alone and preferably in disguise.

Story comments: from a marketing point of view, this film was a great idea: a feel-good chick flick where the guys can have a good laugh as well. I can see the meeting which spawned this production in my mind’s eye. The logic was flawless.

What this film should have been was candy floss with miniature Budweiser beers and spare ribs rolled in. What it actually became is a silly and deformed knickerbocker glory with an extra layer between the ice-cream and jelly made up of untreated effluent from a town where there is nothing to eat but spam and everyone has dysentery.

Hollywood’s contempt for its audience is well known, but on this occasion, my intuition says they may have lowered the bar to a level the masses are not yet quite ready to sink to. In that sense, this film is ahead of its time. But in that sense only.

Substance comments: the girlie part of the film is just gloss and froth and has no substance other than meeting Mr. Right and deliberating for a while over which lipstick to use before becoming tediously happy. It’s a genre thing.

The guy part, however, poses an interesting philosophical problem: how satisfying can it be long-term, for a man to sleep (with no effort on his part) with all the beautiful women he could possibly want when he knows they are using him short-term as a means to an end – an end which does not include him?

That may seem like the kind of problem one could learn to live with. Or, at least the prospect of having to learn how pointless and hollow such an existence truly is exerts an enduring power over the male psyche.

But, in reality, deprived of the hunt there is no pleasure in the kill. And faced – as the hero of this film is – with an endless conveyer belt of sexual fast food (and with no sense of Fate to connect him to a mate) a man is lost. Without an object (to achieve, provide, or conquer) man loses his sharpness, his instinct, his compass. No amount of beautiful women hurling themselves at you for incredible and non-committal sex can compensate for that.

There you are, I’ve managed to convince myself.

Film craft comments: a pastry-cutter film from the school of glossy rubbish.

A taste of the story: to keep the woman of his dreams from falling for another guy, Charlie Logan has to break the curse that has made him wildly popular with single women: sleep with Charlie once, and the next man you meet will be your true love.