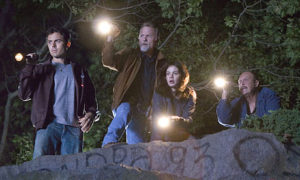 Written by: Ben Affleck & Aaron Stockard based on the novel by Dennis Lehane.

General comments: Ben Affleck – despite the sense of easy entitlement he gives off – has always been conscious of a certain career mortality. Over a long enough timeline, the American public’s interest drops off to zero. He is a very bright guy and knows that his casting type does not have the longevity of, say, De Niro or Cruise. If he wants to stay busy in the business, directing is where he has to go. And that is primarily what this film is about: finding out whether Affleck can direct and, consequentially, has a long-term future in Hollywood.

But it’s not easy. For one thing, Hollywood stars who direct are already famous – and apart from the obvious benefits, the downside is that it’s not possible to work your way up as a director. You have to start at the top. This means that while the rewards are greater, the risks are greater, too. Also, my intuition is that many actors don’t really get that being the director on set is not a role in the theatrical sense, but an actual job. It’s not just a matter of putting on a costume and focusing on your motivation and learning the lines. You have to know what you are doing in reality. All of which may explain why directing debuts by actors are usually painful experiences – Kevin Spacey’s excruciating Beyond the Sea comes readily to mind.

Affleck adapted a novel about child abduction and abuse to cut his teeth on. This may seem risky (in that lots of people simply do not like to watch such stories, including me), but, in fact, it was quite a safe choice. It served his main purpose, which was not box-office success (although that would be cool) but to weld an iron girder under the bullish, conceited pretty boy image with its five-year-max shelf life and say: I am an artist, take me seriously.

Now, that does not mean that I liked Gone Baby Gone in the sense that I want to see it again or think other people are going to like it, either. But it is a well made, thoughtful film, and one which stays with you. But it’s what it presages that interests me. Now we’ve got Affleck’s shot across the bows out of the way, I’m genuinely interested to see what he’s going to do next.

Story comments: this film sets out to inflict a high-octane emotional racking. I mean: child abduction – everyone’s worst nightmare; you can’t go wrong. But the story is made bearable by the details. Lives are believable and counter the ready formulas. For example, the mother whose child has been kidnapped is so abhorrent, so vulgar, so irresponsible, so vile, that I found myself wondering how much worse off the hapless child could really be in the care of her drug-crazed, possibly paedophilic, gun-toting kidnappers than at home with the mother from Hell.

Acting comments: the lead is played by Affleck’s brother, Casey. This is the first thing I’ve seen him in and felt he held it together excellently. He is lacking the well-heeled Harvard grad sheen of his brother, and integrates convincingly with the social detritus the film concentrates on.

Substance comments: there are some very difficult moral choices here, but ones which arise naturally from character and plot and are free of any sort of contrivance. I am sure most of us would take issue with a number of key decisions in the film, but then life (even as portrayed in the movies) is not up for a vote.

Film craft comments: well made, great use of sound and mercifully free of shakycam and CIA subliminal conditioning (I’m still recovering from The Kingdom).

A taste of the story: a childless boyfriend-and-girlfriend team of private investigators are asked to assist in finding a kidnapped child.