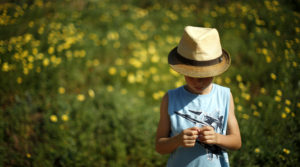 Western children are being indoctrinated with a philosophy fed into their young minds via media and education, one in which the usual claims to ‘compassion’ and ‘inclusivity’ are used as cover.

Gender is fundamental. It lays the groundwork for who you are and your role in the tribe. For this reason – one must assume – it is under attack by the Cultural Marxists, aided and abetted by their point-of-sale dispensers, the liberal progressives.

In Brighton, England, according to the Guardian, thousands of parents were recently asked to state the gender their four-year-old children “most identify with” in a letter sent to them by the local council.

The letter said: "We recognise that not all children and young people identify with the gender they were assigned at birth or may identify as a gender other than male or female, however the current systems (set nationally) only record gender as male or female.

"Please support your child to choose the gender they most identify with.

"Or if they have another gender identity please leave this blank and discuss with your child's school."

In the same piece, the Guardian reports that Cllr Emma Daniel, head of Brighton's equalities committee, said she was aware of "concerns" over the wording. She told the Sun: "We have inserted the additional text about gender identity in response to calls from families, young people and schools to show an inclusive approach.

"There are increasing numbers of children and young people nationally identifying as trans."

Daniel added: "We will review this to see whether we can make it clearer that we consider discussions around gender identity to be an option for parents rather than an obligation."

So, in Brighton at least, the thin end of the wedge is firmly in place. It will be hammered home using the same method Cultural Marxism always uses: professed compassion for a tiny or imaginary number of people used to pollute the minds and milieux of the vast majority by imposing upon it some new reason to be weak, freakish, foolish, unnatural or perverted – meanwhile, holding the threat of accusations of bigotry and lack of compassion over its head if it so much as blinks before the social-engineering project it has no say in, but must pay for, becomes the new status quo.

The Guardian also recently regaled its readers with a piece breathlessly entitled Gender-neutral children: meet the new generation of parents with a gender-neutral approach to childhood.

In it, a single instance of two parents who allow their twin boys to dress up in girls’ clothes is taken as indicative of a ‘new generation’ of parents.

The piece reports that "parents Gabriella and Joe Haughton-Malik describe their children as boys and use male pronouns, but don’t want their lives or their playtime to be restricted by traditional concepts of gender".

"The twins are just as likely to don a princess’ gown as a pirate’s outfit. In a recent video interview with the family, the twins can be seen proudly showing off glittering manicures and hopping around in their Disney-esque gowns."

The point is not that children – left to their own devices – might occasionally put on all kinds of clothes, but rather that there is, allegedly, a movement of parents who direct their children’s play along such lines for political purposes.

Solipsism – as ever – is never far away. The boys’ father says: “We let them do whatever they want to do, to a degree, so long as it’s safe.”

And – as ever – if you don’t ‘get’ it, then you’re the problem. Gabriella explains that reactions to their gender neutral approach have been mixed: “We went to Ikea and we got there and they just get quite subconscious when they walk through the door. I think it’s more to do with other people, other children than it is to do with how they feel about it themselves. In their own space they are perfectly comfortable with it, it doesn’t faze them.”

Clearly, this is psychological abuse: dressing your young boys up as girls and parading them about in public places and on YouTube in order to achieve Skinneresque social-engineering outcomes.

I take solace in the thought that these two lab rats are likely to take to boxing and whale-wrestling as a means of getting their parents’ insanity out of their systems, once adolescence kicks in.

The Independent is on board – predictably – with the horror of it all: children’s toys are designed for girls or boys.

Its piece trots out the same well-worn tropes. The emphasis is on ‘safety’ and ‘feelings’ – both used as magic fairy dust to wave through a well-honed plan to screw up your children: Let Toys Be Toys campaigner Jess Day said the group believes “there is no such thing as a "girls’ toy" or a "boys’ toy," but TV adverts give children "narrow and limiting ideas about how boys and girls behave, and how they’re expected to play.

“Play is vital to children’s learning and development. A child should feel free to pick up and play with any toy they like, providing that it’s safe and age-appropriate.

“Kids deserve better. We’re calling on toy companies to act more responsibly, and use their creativity and innovation to market toys without promoting harmful and limiting stereotypes.”

The ‘expert’ quoted in the piece is Dame Athene Donald. She claims that ‘leading British scientists’ (who remain anonymous) warn that ‘gender stereotyping starts very early with the kinds of toys children play with, and influences whether girls believe they can excel in science.’

She is quoted as saying: “We need to change the way we think about boys and girls and what’s appropriate for them from a very early age. Does the choice of toys matter? I believe it does.”

The culture-creation machine has been pushing androgyny for a long time. Its first full-on attack came with the Glam Rock movement fronted by such people as Marc Bolan and David Bowie, but has kept up a background barrage ever since via the likes of Annie Lennox, Michael Jackson, and Boy George.

Now that androgyny has been demonstrated to mortals by the gods – I mean the stars – it is now being rolled out for the plebs. This is how culture creation works. The much-vaunted hedonism of the 60s, for example, only filtered down to the masses in the 70s.

Monkey see, then monkey do

To be allowed further up the greasy pole, stars now have to appear to support causes. One of the assets in this social-engineering programme masquerading as entertainment is actress Emma Watson – otherwise known as the only child in the appalling Harry Potter series who could act. One of Watson’s ‘causes’ is the societal canker pushed by universities and Hollywood alike known as feminism.

I find it interesting that Watson has been allocated this role since – stripped of hair and make-up – her face is perfectly sexless.

Like many assets in the ‘gender-fluidity’ programme, Watson has promoted the idea that gender should not be considered in terms of binary, polarized opposites, saying: “It is time that we all see gender as a spectrum instead of two sets of opposing ideals.”

And this is the point. Gender is not a spectrum, it is a polarity.

If its ‘ideals’ are opposing, that is part of its purpose. They are designed to complement and perfect each other – while remaining distinctly different.

Any society that loses its grasp on this obvious reality has no future – a point that for me is instructive.

It may be that some small numbers of girls are destined to be great scientists – and bully for them. But the vast majority of women are not going to be found crying into their cups in their dotage because they missed their calling as nuclear physicists. Whereas the number inflicting their painful neuroses upon the rest of us because they were duped into buying into feminism and trashing femininity, and thus find themselves with no husband or children, is so commonplace it has become a modern-day stereotype.

I detect a polarizing agenda running through the media narrative. It has the insanity of Cultural Marxism on the one hand, and the insanity of so-called Sharia law on the other. These two agenda items will naturally be brought into conflict.

Those familiar with the Hegelian dialectic will recognize the familiar ingredients – thesis and antithesis – as the set-up for the inevitable synthesis. What that synthesis will be, I can’t say, other than it will have nothing to do with what normal men and women normally want.

What I am sure of is that both the progressives and Sharia-touting Islamists are unwitting pawns in bringing that end about – and that both will continue to be useful to that small clique which decides social policy and declares war on those who wish to have sane, generative, enduring families.