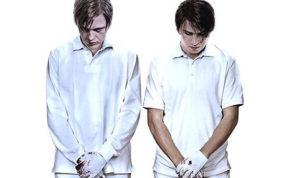 Review top sheet: this film is called Funny Games but there is nothing funny about it at all – be warned. This is definitely not a first-date film, nor perhaps a date-film of any sort.

And another thing: after seeing this one, you’ll never stop to talk to Mormons again.

General comments: it’s going to be hard to talk about the substance of this film at all without spoiling it. What I can say, is that it’s a low-budget thriller with a strong and original core which is essentially a play on film.

You’re going to love it or hate it. Most people hated it – intensely. A few people took off about twenty minutes in, once we could see what kind of time we were in for. The remainder hung in there feeding off their dislike to the very end. To make something so widely repellent is an achievement of a kind.

I respected this film for what it is – an original, gripping film made on very little money. But I won’t be buying the DVD.

Funny Games challenges some our conditioning. Our expectations are confronted and thwarted. It even blatantly mocks the audience at one point. It’s the Iggy Pop of cinema. However, the fundamental contract with the viewer is not broken and even the mocking episode is correctly set up in the preceding action. This can be contrasted with Lynch’s Mulholland Drive (in which Naomi Watts also stars, incidentally) which tries to switch genres halfway through – a tactic I found pretentious and annoying. Funny Games is original in a way that works. It is faithful to the demands of one particular genre – the thriller – and slaps the audience around within the rules of the genre while pushing the envelope in terms of our subconscious demands on the story.

I will never go and see this film again. The actual watching of it was a painful, irksome experience. I don’t feel that it enriched me in any way. But it is a clever script and the sort of film which will stay with you much longer than you can possibly want.

Story comments: if you’ve seen (and enjoyed) Richard Linklater’s Tape, for example, you’ll get this film immediately. Limited budget and cramped locations lead to heavily dialogue-driven stories – which I personally like a lot. But if it looks crap and cramped that’s, well, because it is. Not everyone has a billion-dollar budget. But when it works, it puts the mega-buck films to shame. Oh, and makes a great deal more money back per dollar invested than the expensive films.

Acting comments: I’m not a huge fan of Tim Roth – especially when he’s doing American – but Naomi Watts is a superb actress. She is utterly believable and frighteningly good.

Substance comments: this is a difficult film to watch, but for a lot of acceptable reasons. But because those reasons are predicated on a chance set of circumstances, their applicability to our lives is very limited – or, at least, let’s hope so.

Film craft comments: the director has achieved a lot with a strong script and some excellent actors. He can expect that Hollywood will bump him up to the kind of budget where he can start to play with his camera and afford some effects in the near future. This film was not the place to go crazy.

A taste of the story: when people you vaguely know turn up asking for favours, just go and get your gun.