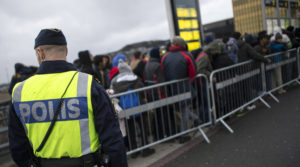 Prior to the mass invasion of Europe, liberals controlled debate by means of crude stop-words (bigot, racist, etc.) or accusations of a lack of compassion (with themselves as the arbiters of compassion, naturally). But there is a sea change occurring.

Europeans – terrified though they are of being thought anything but good, kind and orthodox, no matter their private opinion – are now afraid of something else. They can see that the liberal doctrine of obeisance before each and every outsider in which they have been schooled – if left unchecked – is going to leave them interlopers in the lands their fathers died defending.

They have woken up and smelled the agenda: the ship has an iceberg embedded in the hull; and it was Political Correctness – or Cultural Marxism – which put it there.

And this shift has made the job of self-appointed social gatekeepers – from well-heeled, well-lunched, first-tier think tanks all the way down to third-rate, bottom-feeding trolls sniping anonymously from behind fictitious names and pretend honors for minimum wage – more difficult. Whereas previously, Europeans could be kept on-message with the project of their own demise with nothing sterner than a set of Thaler and Sunstein nudges and a palette of meaningless and generally incorrect epithets, the populations of Europe are beginning to get it: either we put grown-ups back in charge of the ship, or it is going down.

I don’t do party politics, so I’m not backing Cameron here. But he said a thing which I thought was significant. He recently berated Labour – the ostensible opposition – in the House of Commons for offering to return the right of flying pickets to the unions, to give away the Falklands to the Argentians, and for inviting ‘a bunch of migrants’ in Calais to Britain.

Naturally, he was jumped on by the liberal press – and Cameron knows the script, and he will not deviate from it. His comments were a standard three-point punch: unions, Falklands, migrants. He was not delivering an off-the-cuff remark. Those lines will have been debated for hours, and he was revealing a declaration of policy – at least at the level of theatre – in order to play to a growing sentiment which is that capitulation as policy and inclusion as strategy is cultural, national and – dare I say it – racial suicide. And despite all the education and entertainment of the last fifty years, a sizable number of people is still not ready to embrace and celebrate that eventuality quite yet.

People see that right across Europe there are cities where women may no longer walk safely, because their governments have allowed an invading army – out of ‘compassion’ – to occupy their homeland. And they now sense that it was the control on free speech by the liberal thought police which brought us to this impasse.

And while they still suffer from the trained reflex to want to be normal and liked and thought good, they don’t want their wives and daughters raped while the police do nothing for fear of being seen as racist.

No country has been as susceptible to falling abjectly before the liberal’s compassion-and-goodness card as the Germans. Since they lost the war, they didn’t get to write the history. And that history – one crafted by the victors – is forced down their throats from birth. But even in Germany, people have had enough. Sky News reports that 40 percent of Germans want Merkel out over her immigration policy.

We can take it as read that at least that number want their country back.

But then he would think that. His entire world view is based on the assumption that all it takes for one to become as big a fool as he is is a few therapy sessions and a box of Kleenex.

The invading army of young men, meanwhile, is looking to do what all invading armies do: spread its seed among the females of the defeated tribe.

Sweden, rather spectacularly, looked set to send back 80,000 illegal occupiers of its country. But this last-ditch attempt at national survival will likely prove to be little more than PR designed to manage the increasingly restless Swedes who are all compassioned out. The article (from the Guardian) originally said that the Swedish authorities claimed it would take“several years” to eject the immigrants, but later updated the article with that part removed.

The Netherlands have floated an idea to send immigrants reaching Greece directly to Turkey. Turkey currently has 2 million Syrian refugees – and most of those coming to Europe are economic migrants, not Syrian refugees.

Meanwhile, Greece has been berated in a report by the European Commission which claims it has “seriously neglected”its obligations in controlling the external border of the EU space. Greece has been given three months to rectify the situation.

Clearly, this is all nonsense. European countries have warships with guns. Given any real intention to defend the EU, invading vessels would be treated as such and the entire problem would be put to bed in an afternoon.

But what is interesting is the change in vocabulary. Any deviation from the enforced language of ‘compassion’ is now no longer verboten.

I agree with the liberals on one thing: I also wish everyone were lovely and wanted to have a big hug together and live in harmony while respecting each other’s differences. It sounds lovely.

For me, it’s right up there with Father Christmas coming down the chimney with presents and Peter Pan, Tinker Bell and fairy dust – especially, given that the rest of the time our tax money is paying to bomb countries into compliance with the new international order.

Unlike liberals, I understand that such stories are just that: stories. There is this unpleasant thing called Reality. And while the culturally emasculated liberals in Europe have had their natural drives overridden by well-sounding but pernicious indoctrination, the invading army of ‘migrants’ has been eating Reality for breakfast, lunch and supper. This army of young men knows exactly what’s going on, even if the squeamish and effeminate Europeans do not.

‘Compassion’ and ‘tolerance’ like ‘freedom’ are slogans. Devoid of context, they are simply weapons which can be used to achieve pre-determined ends. And while those who are stupid enough to repeat them without having considered those ends have no idea what the result will be, those who were intelligent enough to craft them and promote them know exactly where they will lead.

The rational among us have been kept in check since the roll-out of Cultural Marxism by stop-words such as ‘bigot’ and accusations of a lack of ‘compassion’. But now the liberal’s chickens have come here to roost, standing up to unbridled ‘compassion’ is not just a matter of common sense. It is a matter of survival.

We can always find people to find compassion for. How about some for our daughters or wives?

Despite the predictable attempt to close down the debate and brand Morvai evil, it is significant that a forum as uniformly orthodox as the Committee of Women’s Rights and Gender Equality should demonstrate such cracks in its foundational assumptions.

As education has been systematically dumbed down, it has become easier to sell the tax slaves policies inimitable to their cultural interests, since people have been divested of the tools needed to think logically. As long as visceral responses were properly anchored and triggered, the agenda could move along.

Claims of – and appeals to – ‘compassion’ combined with accusations of bigotry or worse for those who did not conform to predetermined definitions of the same is how the liberal has dominated the debate thus far.

Now this process has hit a fundamental crossroads: the clash between gushy, emotive indoctrination and the fundamental requirement to survive.

Now not every voice of dissent or reason can be quelled with the CRB (compassion-racist-bigot) card. There are literally billions of people in the world who want to live in Europe. A line will have to be drawn if Europe is not to resemble the countries the ‘migrants’ come from.

And it is compassion – one which is founded in reality – which will have to draw that line.