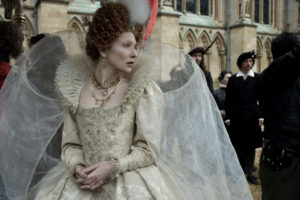 Review top sheet: an engaging sequel to Elizabeth: the Virgin Queen; vaguely based on the next chunk of the life of Queen Elizabeth I of England, where Cate Blanchett and the costume designer again tie as man of the match.

General comments: history is said to be written by the victors. By that measure, Hollywood and the people who run it have conquered the earth. Be it Noah, Joan of Arc, the bombing of Pearl Harbour, the German concentration camps of WWII or the Iraq war, the process is the same: Hollywood makes one or more films on the subject, and with that the official version is set. Of course, in our rational minds, we all know that these are only films, but when we access our subconscious minds on the fly, Hollywood provides the clearest and most instantaneous references we have.

Orwell observed: He who controls the present, controls the past. He who controls the past, controls the future. And this level of control is easily gauged, even under the system known as Democracy where we are encouraged to feel we can exercise discretion in the matter of our opinions. The charade of freedom ends abruptly when the opinions expressed are not on the menu. Take mainstream history: there are versions of particular events that countenance nothing less than total acceptance. Whether such versions are true is not the point. They form an invisible wall which exists most demonstrably at the dinner parties of the chattering classes. When you hit it, you will know because you will be rebuked by a torrent of self-righteousness, anger and withering scorn – and when the night is over you will be struck off your hosts’ Christmas card list. This from people who would claim to their dying day to be free-thinking liberals.

So were they actually there? Did they witness the events in question with their own eyes? No, of course not. A film director decided what happened with an eye to the Oscars and everyone watched the resultant film. The myth is now reality and woe betide you if you try questioning it. That’s the power of celluloid over real historical investigation or intellectual inquiry.

Of course, just because we take our history from books rather than films doesn’t mean our view is not distorted. Intelligent-sounding books are frequently full of absolute rubbish, as anyone who has done a degree will confirm. However, Neil Postman in his Amusing Ourselves to Death argues convincingly that film – by its very nature – is condemned to trivialise and distort fact. It can do nothing else. With the best will in the world, one hundred and fourteen minutes are simply not enough to “do” a chunk of Elizabethan history

So does all this that mean that Elizabeth: the Golden Age is a bad film? Not at all. The first twenty minutes are a bit clunky and Walsingham has lost much of his gravitas since Elizabeth: the Virgin Queen, but it’s a damn fine film all the same and I enjoyed it a lot.

But it – just like all the other films “based on history” – has nothing to do with history whatsoever. It’s just a story.

Acting comments: Cate Blanchett is great and the relationship between her Elizabeth and Owen’s Raleigh works in Hollywood terms.

Substance comments: this film combines the themes of faith in one’s destiny, acceptance of one’s duty, and both sides of the coin of power; an insightful and enriching exposition of human strengths and frailties, and mercifully free of any sort of politicisation of Elizabeth for ‘feminist’ purposes.

A taste of the story: the film focuses on the years of Elizabeth’s rule where she consolidated power at home and abroad, and her relationship with the adventurer Sir Walter Raleigh.