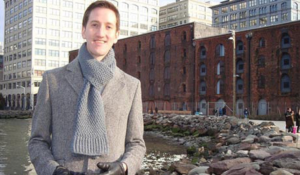 Joseph DeVeny is from Ohio in the US. Born and raised a Baptist, he had a strict religious childhood, but he reviewed his position as he grew older.

He enjoyed the humanities and music as a child, and played the bassoon and flute at school.

He went on to study German and Russian at university, and came to Russia for the first time while a student. After university he came back to Moscow and did an internship with a human rights group.

He then worked as a translator for some time in a market research company, eventually moving from translating into the research side. He also worked as the Communications Officer for an American NGO for a couple of years, but ultimately moved back into marketing research. Joseph has been in Moscow a total of nine years.