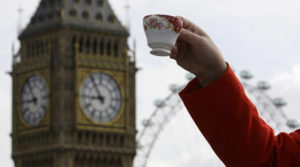 The morning’s headlines proclaiming the unthinkable didn’t make sense: the UK was leaving the EU; Cameron was resigning. The world had ended and been born anew.

I’ll admit it, I was temporarily stunned. Jacob Rothschild had called for a Remain vote. What else was there to talk about? I hadn’t seen that one coming.

For an entire minute it felt as though there was a chance of a return to the halcyon days, an end to the insanity of moral confusion: no more ripping right things from their places and twisting them into troubling, hybrid forms. Children would be able to play safely in the streets again; decency and order would return; Britain would rise phoenix-like from the ashes of a pitiable self-parody in decline; men would wear tweed, and the women would stop walking like nightclub bouncers and swearing at their children in the high street.

The attempt to brand as morally compromised those who want something other than cultural obliteration for the UK seemed to have failed. O, happy days.

Then I had breakfast.

As I ate my eggs, insulated from the frequent calamities of a boisterous three-year-old by thoughts of what had happened, it felt as though some ostensibly welcome but ultimately weird event had taken place; as though a mystery person had built a conservatory onto the side of our house in the night.

It would be nice to have a conservatory. But if one appears out of nowhere, you’d be mad not to be very alarmed.

I won’t lower myself to vote in elections. It only encourages the charade. But I did register what I assumed to be a protest vote in this referendum, and placed my mark using the government issued pencil in the appropriate box.

What I wanted was not on the ballot, of course: for Britain never to have joined the EU at all; for the last forty-something years to be rolled back.

Mark Twain is attributed, some claim falsely, with the thought that if voting changed anything, they wouldn’t let us do it.

But no matter who said it, it is right. We are managed, and the last thing our rulers care about is what the ghastly masses think. But they like to monitor herd trends and use them to direct the herd efficiently towards the pastures they have marked out.

Thus, rather than being a medium of free communication, the internet is primarily a monitoring tool. So aggregate trends in herd psyche are known and mapped out in real time. If you’ve ever used Google Analytics, you’ll understand. They don’t have to guess what the herd is thinking; they know.

What will have been known before the plebiscite, and has now been publicly revealed by it, is that the population is split.

Half the herd is current on its updates. This demographic has had a full set of shots, and is bleating its way happily into a relativistic reality based on feelings, groupthink and a collective hive mind; it has little attachment to the past and its comprehension of the future is a CGI construct courtesy of NASA and Hollywood.

Then we have those who retain a sense of the past, of tradition, of the value of their own culture; people for whom the collective is neither God nor trumps the individual.

The future is being designed to tolerate later iterations based on first group. The second group is, in computer terms, being deprecated. However, since we are at a halfway juncture, you would have to be a very stupid strategist not to exploit the inherent potential for conflict between the two groups, between the sheep and the goats, as it were.

Accordingly, the sheep are busy baaing at the goats, while the goats bask in the sun of the impression that they won something.

Meanwhile, it is business as usual for the shepherds.

Prior to the vote, Cameron said there would be no second referendum. This indicates to me, in retrospect, that his bosses have made the decision: the system is getting a makeover.

To put events in perspective, we need only ask fundamental questions.

Has the fiat economic system been challenged? Are the bankers now in gaol and usury shunned and spat upon? Has the cultural attack against ever right and normal instinct been defeated? Is the media now to be required to do its job or the education system to train children to think rather than to obey? Have the iniquitous taxes on labor and death been removed? Are we now going to stop bombing those countries that refuse to turn their money over to the central banking system, which controls our countries and everyone in them?

In short, the infrastructure is as robust as it has ever been, and all that has changed is that the operating system is going to get a new front end and people will get busy arguing over what color the buttons should be.

With or without the EU, the core agenda items will continue to be pushed through, just as they have been in Norway and Switzerland. Neither country is an EU member, yet both have seats at the high table of taxpayer-funded cultural suicide through mass immigration; both are run by central banks; both have the same supine media and economic, educational and pharmaceutical matrix as everywhere else.

It is a difficult concept for people schooled in the Prussian system of education to internalize, but as I touched on last week, our rulers use Aikido, whereas we are trained to arm-wrestle.

We are ruled not simply by virtue of a greater opposing force, but by a technique which includes the employment of our force against us, thereby drawing us inexorably toward aims which those who employ the technique determine. The output of the technique is an environment which itself operates as quicksand, and the types of resistance which seem obvious to us are worse than merely futile; they drag us further downward.

The recent spectacle has had people thinking in terms of winner and losers. This is a primitive position. The result simply presents a new spectrum of opportunities which can be guided according to the strategic requirements of those who understand the technique.

At the more immediate level of the day-to-day drama, it has been amusing to see the collectivist liberals crying over spilt referendum milk.

I regard democracy as an amusing idea; the sort of thing you tell small children; like tales about Father Christmas, it’s not something I would expect grown-ups to believe in. But they do. And those who do, effectively claim to believe that the mean outcome of a vote by a large number of highly indoctrinated people on a subject framed and controlled by a small number of plantation owners is inherently significant - holy even.

So if that’s your view, you should have been happy that the majority prevailed.

But no. The Remain camp immediately threw its toys out of the pram with 2.5 million people bleating within days that the holy answer reached by the holy process wasn’t holy enough; they want another answer.

This, at least, has exposed them. Their claims of tolerance, inclusivity and fair-mindedness are just wallpaper. When things don’t go their way they dissolve into a froth of effete hand-wringing or erupt in a volcano of nose piercings and green hair, looking for a government safe space to make reality conform to their recent conditioning.

None of this runs very deep. Most of their frustrations could be assuaged if they understood that the Norwegians and Swiss have visa-less access to Europe. Their rave parties on the weekend in Amsterdam are not necessarily under threat.

We have the internet. It's very easy for those of us still possessed of a functioning mind to find out how badly we are getting screwed, and by whom. Increasingly, we understand that we are being transitioned from a silk-glove to an openly iron-fist environment.

We may be a 9/11 or two away from full-on gun-in-your-face tyranny, but we are monitored, and those who do the monitoring know that people are waking up to the fact that the cattle have no say in where the cattle truck is taking them.

It doesn’t matter how the narrative is directed following the Brexit vote, a crashed UK economy forcing its return to the EU as a warning to others; a long goodbye; or the UK’s example auguring the collapse of the EU construct – the irreducible outcome of the recent pageant is that the floundering democracy brand has had a shot in the arm: Yes, children, voting really changes things.

I have to assume that this was a key propaganda requirement behind the drama: The need to sustain the democracy mythos a while longer.

But I don’t believe it.