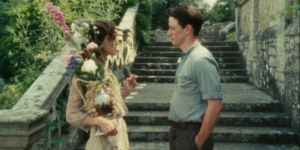 Review top sheet: Atonement is a visually rich, somewhat over-extended drama with lots of well-practised, prissy English voices, such as one rarely since the educated classes in Britain began watching East Enders, dropping their aitches and calling each other mate.

General comments: Atonement is a sprawling, inconsistent film: in places under-baked, in others, self-indulgent – but beautifully shot throughout. Twenty minutes could easily have been sliced from the film with no great loss to the story. They were left in because they looked great. Fine. If that’s justification enough, lets just forget about story altogether and turn on our fractal screensavers.

The film is set in an England the tail end of which I just caught as I grew up in the East Anglia of the 70s: a largely rural, racially homogenous land with a well developed class system and a sense of its own identity. You might not have liked it, but you knew where you were. That’s almost all gone now, of course, as we’ve been dumbed down and debased in every conceivable way to comply with the dictates of a politically corrected, multiculturalised future where there is no identity, you can no longer say what you think in case someone takes offence, and excelling at anything is a crime. The only place real England exists today is at the cinema and if I want to visit it, I have to buy a ticket.

The new reality we are being conditioned to via media requires that history conform to its agenda. Alive to the way the wind is blowing, Atonement inserts a black man prominently into a 1940s British Army regiment without comment or explanation. It’s just ludicrous. But if you want get your stuff viewed, you have to co-operate with the re-writing of history to fit the dogma. Historical fact is no defence against an accusation of lack of inclusionism from the thought police, and the decision was clearly made to err on the side of caution.

In terms of the cultural tourism so much “historical” cinema represents, the film has some merit, but does not come close to Howard’s End – a masterpiece of the genre – for my money. Nevertheless, Atonement is bound to be a favourite among young foreign women who – disillusioned by their own reality – pine for an England they learnt of through reading novels, but can’t afford to visit. I personally hope they never make the journey, and are left to nurture their illusions unperturbed through into their dotage.

Story comments: I understood what the film was trying to do: create an vibrant tension between the hero and heroine whose love was thwarted by Fate and the caprices of a particularly fanciful young girl. For me, it didn’t quite get there, but I still enjoyed the process, though more for nostalgic than dramatic reasons.

Acting comments: Keira Knightley managed to recreate something of the walled-up passion which characterised the English upper class as she strutted about in a cloud of stiff-upper-lip peevishness and pouted her way through countless cigarettes. James McAvoy felt reasonably authentic, but I can’t say I cared much what happened to him. Vanessa Redgrave was man of the match for me.

Substance comments: this is not a deep film, despite the educated voices – the usual: love’s good, war’s bad, life sucks.

Film craft comments: the film has too many people going on in it for us to develop clear sympathies. The director seemed to think we could be counted on not to lose sight of the fact that until the hero and heroine have either properly shagged each other or are dead, the film can not be said to be over. And with that construct safely in place and generally accepted, he pretty much had free reign to splash his palette around as he pleased – which he did most impressively.

A taste of the story: a young girl with a penchant for writing and an over-active imagination irrevocably affects the lives of both her sister and her sister’s lover.