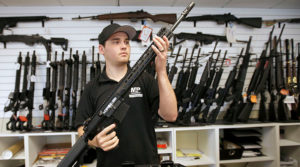 Predictably, there has been a round of attempts to ride the wave of the sensational event in Orlando to push forward the ongoing project to wrest guns from the hands of American citizens.

The latest manifestation of this tedious program featured Democrats staging a sit-in in a rather silly parody of the human rights protests of the sixties.

The irony was obvious: a coterie of privileged millionaires protected from the unwashed masses whom they manipulate for their billionaire and trillionaire masters protected by men with guns while protesting that guns are bad.

The idea that the liberals assume – and wish you to assume – is that those who are in favor of gun control hold a monopoly on compassion. Obama’s speechwriters have him cry crocodile tears during his move against gun ownership, yet he – like the aged and overweight rebels in the sit-in protest – is surrounded 24/7 by men with guns.

He is not against guns. He is just against them for you.

And this is the crux of the fallacy upon which the liberal claim to moral superiority is based. Those who say they are against guns are not against against guns per se. Guns exist; they are not going away. But their policies would take guns away from the American public and concentrate them in the hands of the US government and criminals – two groups which become increasingly indistinguishable the more helpless and defenseless the broader population grows.

Liberals trot out gushy, emotionally-driven arguments against the right of the population to bear arms – arguments which are thinly disguised ruses designed to leave the population defenseless.

People get killed with guns – so the argument goes – so guns must be banned. Around 33,000 people are killed in car accidents in the US every year. That’s around three times the homicide rate with guns. I don’t hear cries for cars to be banned because cars kill people.

Cars don’t kill people. People kill people. And there is an obvious logical conclusion here pertaining to guns which the liberal assiduously misses.

Ignored in the cases of the high-profile mass shootings used to force the debate against those who defend guns is the role which prescription drugs play – or even the circumstances of the events themselves – for example, in Orlando and Sandy Hook. Ignored or downplayed also are the myriad cases in which gun-owners prevent crimes.

Another argument put forward is that citizens should not have the right to certain types of guns. This is a slow-burn attack against the right to keep and bear arms, because once you yield certain types of gun, by the time the liberal law-making machine is finished, you will require a special government dispensation to pack a water pistol. This type of argument assumes your desire to own guns is actuated by something other than what the Second Amendment does, namely: the requirement to keep US government in its place. If that requirement is kept firmly in view, the argument against particular types of guns fades away.

The liberals assume their conclusions; firstly, that if what they want to happen had happened what actually happened wouldn’t have happened and, secondly, that if you don’t subscribe to that position, you do not care that what happened happened, or are unfeeling toward the people it happened to. These are unproven – and unprovable – positions, but they have an emotional appeal for those unable to distinguish logic from gush, and are used by trained debaters who understand the limitations of their audience for this reason.

Embarrassingly for liberals in the US, where guns are outlawed crime rates skyrocket.

Piers Morgan employs both the appeal-to-emotions strategy and the some-guns-are-bad argument against Ben Shapiro who deals well with most points through the hail of bullets coming from Morgan; and when Morgan makes Shapiro seem kooky for suggesting that the government might go what Shapiro calls ‘usurpacious’, under such intense fire Shapiro is unable to make the key point: that an armed population makes such a possibility less likely.

In Europe, government tyranny has broken out like a rash with unerring regularity.

In the UK, for example, we are so used to not really owning anything (we have to pay taxes on anything of value we think we own, and when we die the government taxes it all over again) and having no means of defense (if you try defending yourself against attack you are likely to go to prison) we don’t even know that it can be any other way.

But America was – and to some extent still is – different. In America the common man retains the right of the nobility in many states: he can own a gun and defend himself and his country against the government using it.

But that last vestige of freedom is being chipped away at.

The United States is already usurpacious. Americans have had almost everything taken from them. The laws on posse comitatus have been circumvented and the police has been morphed into a militarized organization which sees the population as the enemy.

Freedom of speech as a basic right – unless one is agitating for a sanctioned agenda item – is a thing of the past; banned except in so-called free-speech zones.

A full-on domestic spy agency is in place which would make the Stasi seem small-time, and torture is defended and advocated by people in senior positions.

Rather than the home of the brave and the land of the free, the US has become the place not to go on holiday if you don’t want a gruelling or groping by the TSA or a full-on beating or tasing by the steroid-head police force; the range of oppression you can face at the hands of America’s soda-guzzling, pizza-eating Blue Shirts grows daily more bizarre.

The political process is a sham and the media is weaponized, serving undeclared interests and poisoning the body politic. And the FBI will find you innocent of major crimes if you serve the system long enough for it to hand you the baton as the next President.

If this is not indicative of usurpacious government, then what is?

The one thing remaining to America from its frontiersman, self-reliant origins – the one thing standing between that diminishing portion of the US citizenry still capable of rational thought and open tyranny – is the fact that when the militarised police start shooting at the people, the people can shoot back.

The gun question boils down to core views on responsibility: who do you want to take responsibility for your life – you or the government?

Liberals are fundamentally collectivistic and statist. Like Stalin or Hitler, they want to legislate personal initiative and responsibility out of the equation and render all people dependent on government. They believe in collective punishment. If one man somewhere kills a cat with a tin-opener, then prosecuting that one man is not the answer. No, all must be punished: tin-openers must be banned.

At the same time, the liberal insists that weakness is the only morally defensible position; like a silly young girl he believes that if he is loving enough, life will love him back. It is the victory of hope over experience; of utopia over reality; and rather then step up to meet the shortfall between reality and dream himself, he wants government to do it for him – and for everyone else – by giving all power to the state. He is, in short, a born peon, a slave.

The individual accepts that bad things happen and believes that it is his responsibility as a grown-up to deal with them. While he does not insist that the liberal concur with him, he also does not allow the liberal to dictate to him. To him, what the majority has been conditioned to think it wants is not of fundamental importance. Rather, if the individual does not have rights which trump those of the majority, then there are no rights at all. He believes in what America once used to represent: freedom.

America was built by the individuals; it is being co-opted by the statist liberal collectivists. All that stands between the America of the individual and a communitarian, crypto-Stalinist state with a McDonald's front end is the belief in the minds of some Americans that they can – and should – retain their arms.

If the liberals, the suborned fourth estate, and those who direct them succeed in undermining the Second Amendment, along with the rest of America’s founding principles, then the usurpation of America will be complete.