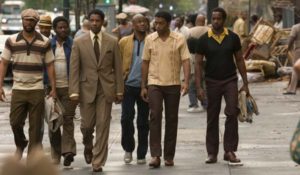 Review top sheet: Ridley Scott is the man. He has never made a bad film that I can think of. He has great instincts, taste and a feel for intelligent, popular drama sharp enough to keep him at the top of the director super league.

American Gangster is a crisp, edgy, violent film full of incongruous characteristics, moral complexity and what I felt to be some very odd casting decisions based less on suitability and more on box-office considerations. Worth a watch, though, but take a thermos and a box full of sandwiches because this is a long film.

General comments: American Gangster is well-made and interesting in its own way, but I didn’t feel it merited 157 minutes (a whole hour longer than the majority of films, which are kept as short as possible to keep the cash cow grazing and people buying overpriced puffed-up bits of corn and sugary water – which is where cinemas make their real money).

American Gangster is based on the true life-story of one Frank Lucas (played by Denzel Washington), a black drug dealer who had street smarts, peddled death, shot people without compunction, dressed like an accountant, and loved his mother. His nemesis, played by Crowe, is also a similarly messed-up type, whose defining trait is a kind of sociopathic honesty – a characteristic which both off-sets and seems to justify his underlying rottenness.

Story comments: along with all ‘true story’ films, we find real life crumpled into a template which results in a film nobody anyone who was there at the time would recognise – but is a pretty good yarn all the same.

Acting comments: I had a problem with both the lead characters in this film. Let’s go with Russell Crowe first. I completely loved Gladiator (also by Ridley Scott), and Crowe was perfect for the part (his occasional lapse into ‘Strine notwithstanding). But all his roles since pale beside that one, and I spent a lot of this film being mildly impressed at how Maximus was handling life in the 20th century and expecting him to draw a short sword on Denzel. A bit like Ewan McGregor in Trainspotting, perhaps Crowe’s defining role came too early in his career. Unless he meets a director who can take him to the next level – as Tarantino did with John Travolta – then Crowe, for me, will just continue being New Zealand’s best general in the Roman legion.

Now for Denzel Washington. He’s a fair actor and puts me in mind of a younger Morgan Freeman. He has the same intelligent, contemplative air. This sort of mien is fine if you’re a clinical psychologist but looks a bit naff on a gangster – no matter what character complexities we have tossed into the ring. I simply did not buy into the idea that this man could get seriously annoyed with his wife, let alone commit a cold-blooded killing before continuing with his lunch. Plus, the rest of his family looked like they occupied a completely different branch of the evolutionary tree. In short, Denzel looks less like their older brother and more like the kind of guy they might all go to for counselling in an institution for young offenders. But not only is wise Denzel related to them, he chooses to trust these genetic retards with the particulars of his dangerous business. Somehow, I don’t think so.

Substance comments: an interesting exploration of moral complexity and how we need to feel that we are good people no matter what stratum of moral geology we truly occupy.

No one sees himself as bad. Even if you’re a mass murderer, you still reckon you’re an okay guy: Hitler, Stalin, Mao, Bush, Blair – with one obvious exception, they’d all make very interesting people to meet for dinner. I’d definitely go if I had the chance. My personal favourite architect of death at the moment is Richard Pearle. But do you think Richard feels bad about what he does in the world? Not at all. And knowing how eloquently he would justify it is part of his dark charm.

On a personal note, it was a revelation to me to find that my view of my myself is not shared by everyone I know, some of whom evidently debate what they imagine to be my faults and warn others against them; which just shows how deluded intelligent people are capable of becoming since the manifest truth is that I am beyond reproach on all counts.

No one is particularly alive to his faults, you see. Are you? No, I didn’t think so.

Film craft comments: the presentation is semi-documentary in style, jerky, quick and slick. Scott is a master.

A taste of the story: following the death of his employer and mentor, Bumpy Johnson, Frank Lucas establishes himself as the number-one importer of heroin in the Harlem district of Manhattan.

There’s no way this can end well.