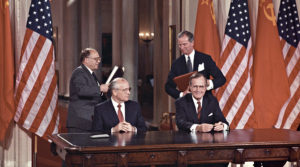 The US was locked in combat with Russia for much of the last century because the latter was Red. Then came Perestroika under Gorbachev, who sank the Soviet Union on the back of deals with the US that it would not encroach on Russia’s sphere of influence.

The US reneged on every aspect of that agreement and has treated Russia as an enemy ever since.

Under Yeltsin, Russia became a vassal state of the type the US specializes in. Vitally, it created – or rather recreated – the Russian Central Bank, and pegged the ruble to the dollar. This meant that it had surrendered currency sovereignty.

As Nathan Rothschild famously said: “Let me issue and control a nation’s money and I care not who writes the laws.”

But the US did care. And it wrote the laws itself, and on Yeltsin’s watch Russia received its legal system wholesale from the hands of the deceptively named USAID. Thus US interests created the rules by which Russia was to play.

In plainer English: an arm of US policy wrote Russia’s Constitution and the entire basis for its Civil and Tax Code.

Let that sink in for a moment.

As a function of the above, the bankers’ puppet Yeltsin handed the country’s entire wealth to a handful of men via a piece of economic theater called Privatization – the macro-economic equivalent of giving someone the keys to your house, having them kick you out of it, and allowing them to make you pay ever-increasing rent to live in the shed while simultaneously debasing the value of your money.

Thus, by means of so-called NGOs, the US hog-tied a broken, failed state to broken, failed-state principles and gave foreign speculators the run of the country allowing them to asset-strip it and enslave the population, having pocketed all the real wealth.

With Russia on its knees in abject abasement before the power of the international banking elite the US Administration was – at last – happy with Russia.

At first, George W. Bush looked into Putin’s eyes and fell into a kind of love. But as US military ambitions as defined for it by the PNAC think tank mopped up anywhere foolish enough to want to trade oil in anything other than dollars – or not sufficiently controlled by a central bank beholden to the same cartel which controls everyone else’s – the bloom faded from the rose.

But despite the collapse of the Soviet Union and the dilapidated infrastructure, some of Russia’s underlying indicators remained robust.

Russia is a country with unimaginable natural resources, a relatively well-educated workforce, and a railway system to link them together.

And now Russia had a leader who was sober, patient, inscrutable, trained in realpolitik and who took his metaphors from martial arts.

As oil prices rose, Russia under Putin – ever so slowly – became something like a proper country again.

And almost on a parity with the rate at which Russia climbed off her knees and onto her feet, the US position towards it soured.

As a corollary to the new language of freedom, Russia’s floodgates were opened for US cultural attack: that stream of moral junk food soaked in monosodium glutamate which Hollywood produces – calls entertainment – and uses to demoralize target populations, including its own.

At the same time, a myriad of well-sounding, well-funded NGOs, Foundations, religions, cults and ‘philanthropic’ organizations arrived in Russia to shape the cultural narrative and win what you might call the Soft Cold War.

But this Soft Cold War combined with a Hard Cold War as the US destabilized countries traditionally under Russia’s umbrella.

Meanwhile, the US moved units and ‘advisers’ in to push ops along.

As Russia grew in confidence, it parried US intervention in Georgia – and rebutted much of the attendant propaganda.

It later acted resolutely to protect its interests in Crimea against US efforts, and recognized the results of a free and fair election there. These events are presented as an ‘annexation’ in Western media – a presentation which is both historically and factually inaccurate.

The US was then humiliated by Russia as Putin entered Syria and exposed the US pretense that it was fighting ISIS for the charade it clearly was.

All the while, the US has been encircling Russia with weapons systems, presenting justifications so transparently inane that a tired Putin laughed in the face of the on-board journalist who referred to them seriously.

And let’s not forget that the US has imposed sanctions against Russia; sanctions being the economic equivalent of a siege – itself an act of war.

As we gradually move from cold war to hot war, the rhetoric is stepping up with Army Chief of Staff General Mark Milley openly threatening to beat Russia with a stick.

But that is what the US has been doing all along.

Meanwhile, Western media is aghast that Russia is moving missiles into areas adjacent to those from which it expects to be attacked. No mention is made of the original agreements that the US would not to intrude on these spaces, naturally.

What is a psychopath?

Russia’s Ministry of Defense reputedly used the word schizophrenic to describe US policy towards its country. I think psychopathic would be a more correct term.

One of the characteristics of a psychopath is that he will claim to be the victim as he attacks you. He will also gaslight any attempts you make to defend yourself against his attack, labeling them as aggression or subversion. And he will never – under any circumstances – acknowledge objective reality, no matter how you confront him with it.

We’ve all encountered psychopaths or narcissists. They’ll hit you for as much of your life, wealth, health and time as you will countenance. Their strongest weapon is your incredulity: because you have a conscience, you cannot believe that the psychopath does not possess one.

But he doesn’t. And the path out from under his influence begins with recognizing that.

Like any psychopath, the US claims good intentions. Generically, it claims to wish to spread Democracy. Democracy is a concept sufficiently elastic to adapt to all and any requirements, but given what the US does rather than what it says, Democracy may reasonably be inferred to mean complete abjection before the international banking elite.

The US war machine

The US has a long history of creating wars. But the last time it officially declared war was in 1941 after the Pearl Harbor attacks. Yet it has conducted military campaigns all over the world since then, with aggregate deaths in those undeclared wars reckoned between 20-30 million souls.

In 1961, at the close of his presidency over the United States, Dwight D. Eisenhower warned specifically against the military-industrial complex.

He said: “In the councils of government, we must guard against the acquisition of unwarranted influence, whether sought or unsought, by the military-industrial complex. The potential for the disastrous rise of misplaced power exists and will persist.”

He went on: “Only an alert and knowledgeable citizenry can compel the proper meshing of the huge industrial and military machinery of defense with our peaceful methods and goals.”

As a contributing writer to RT, I am routinely dismissed as a pro-Kremlin mouthpiece by my detractors. But I am not one.

I am aware that since both the US and Russia have central banks, and the currencies of both are a function of Federal Reserve policy, the two countries have more in common than either would care to admit.

I am also aware that the British and American economist, Antony C. Sutton, convincingly established that Wall Street banks funded the creation of the Soviet Union in the first place.

Since wars require funding and according to my analysis the money spigot terminus is controlled at the Bank of International Settlements, I regard wars as a mechanism for achieving unstated (and often superficially contradictory) social-engineering outcomes which, by means of the Hegelian dialectic, serve the interests of bodies which transcend any particular government.

This is hardly a pro-Kremlin position.

Nevertheless, there can be no doubt who is the aggressor; the US has consistently attacked and undermined Russia and destroyed her allies over many decades. These are simply facts.

And while the real reasons for wars – including those rolled out for the one the US is currently pushing for with Russia – may have only tenuous connections with their stated aims and causes, the weapons used and the people who die and suffer in them are most definitely real.