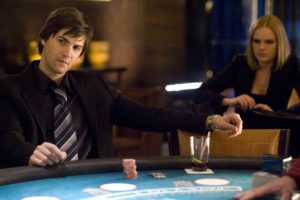 Review top sheet: 21 is a lukewarm, saccharine, predictable story which will keep you from thinking about the report you have to do or the fact that your dog needs to go to the vet’s for a second round of jabs, for exactly as long as the film lasts. After that, your life will come crashing back into your consciousness and refuse to go away.

Having said that, 21 is absolutely perfect for a night in if you have one of those girlfriends whose chief talents simply do not include scintillating conversation, but she gets offended if you turn up five minutes before bedtime. She wants your time, your attention, to grind your soul into dust before she’ll put out.

So if challenge is: how to keep her occupied and happy long enough so you can start concentrating on the talents she does have (and which are the real reason you put up with her) with a clear conscience, then this film is for you. And if she interrupts all the way through the film with asinine comments, it won’t matter. It’s not like you’ll be missing anything good.

General comments: the film’s about blackjack and some brilliant MIT students who learn how to count cards and rip off casinos. You’ll gather as much from the DVD jacket, some I’m not spoiling anything here.

I was in Monte Carlo recently on a business trip and decided to check out the casino. One thing I learnt from looking round at all the well-fed faces at the tables as they fumbled about for something new to give their glutted lives significance was: if you want to make money from gambling, there is only one way to do it: open a casino. The house always wins. Always. So be the house. Most people who go to casinos go because they want to lose. They expect it. And if they don’t lose, they feel faintly cheated. But on a long enough timeline everyone always loses.

In 21, though, the heroes are out to beat the odds – with a bit of help from mathematics, good memories and a system of signals. However, despite their brilliance, they make a lot of really stupid moves – the kind of errors which indicate to me a subconscious desire to lose. For example: they keep going not only to the same city, but to the same casino; they are loud and flashy, plus, they win too much. You have to lose every now and then if you don’t want to get your fingers broken – it should be obvious.

But back to Monte Carlo. I did gamble and I did win. But despite my feeling that I had mystically tapped into a psychic source of knowing what the numbers were going to be (and could now give up my jobs and sit around in a neat suit sipping club soda and raking in the dosh), the truth is it was beginner’s luck. But unlike the lushes propping up the tables there, I really did want to win. Which is why I am never ever going back.

Story comments: you will know what’s going to happen before the opening credits finish, believe me.

Acting comments: Spacey is the man, but even he can’t make idiotic sentiments mean anything else.

Substance comments: if you’re cool and American, keep smiling blandly because everything will work out in the end.

A taste of the story: why gamble when you can win?